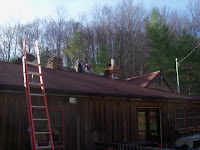 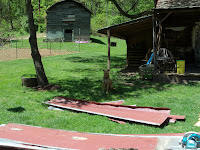 and/or replace framing beneath.  Ensure your dog guards the old metal that has been removed.  This is crucial.  Why, I don't know why...but apparently my handsome man, Copper, thought it was necessary.  He just sat by those piles and watched them get bigger and bigger as the day wore on.  Perhaps his favorite toy, his Kong was underneath.... 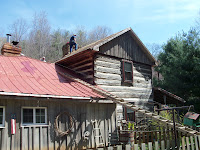 Always work on the roof with the highest pitch first.  Then move down to the next level.  That way you are not walking on the new roof.   As "the boys" worked, I took pictures, cooked lunches for them and sent text messages to our real "kids" (the human ones).  I told Andrea that it was going to be quite warm one day and that I was concerned.  She text ed me back, saying to pour myself a tall one, sit in the chair and just watch those three men work once they took off their tee shirts!! 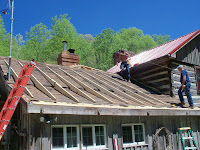 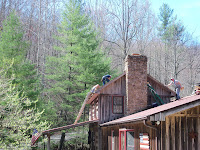 The mudroom was saved to work on last.  It required more work than the other 3 roofs.  Yep, three: 1 over the front porch; 1 on the 2 story original log home; 1 on the extension put on in 1998.  The mudroom really took some thought, because it originally had two different pitches.  We wanted to make it one pitch so snow would slide right off.  So, as you can see, the "boys" as I called them had to build up the framework over the mudroom...pretty cool, huh?

In this picture, you can see how the extension joins the original two story cabin on what was the outside wall right where the fireplace is.  Our home is about 2200 sq ft...sweet!

The finished product is awesome.  It took three men, working five 8 hour days to complete this task.  After it was done, you don't know how worried I was when they predicted rain.

You see, although the roof was done, my Joe had yet to build the wooden gutters (we wanted to try to maintain the authenticity of the look) and put them up.  Good gravy, they were heavy!  He called me (135 lbs @ 62) outside one day and said, "Honey, give me a hand with these gutters."  What was he smokin'???  Just because I go to the Y and work out, doesn't mean I'm the bionic woman!!!  You try lifting a wooden gutter that's 20' long up over your head as he instructed me to "just hold it while I screw it to the house".  Yeah...OK, Joe!!! 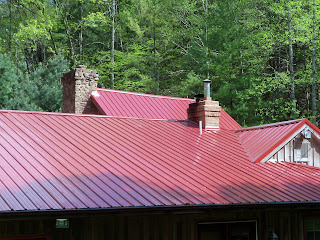 Now, before I was putting this together, I asked my Joe, "if you had any advice, what would you tell someone before putting on a metal roof?"  His response...and it's so Joe...was "tell them not to forget to put the screening under the ridge cap" and "if you're making homemade gutters, run a bead of caulk BEFORE you hang them."  You see, it's done now, but it wasn't done before!  Nope...leave it to Joe to always make work for himself...maybe it's a security thing, what do you think?