Okay, lets lay the cards on the table.  The Home in the Hollow has been on the market for five weeks and there hasn't been anyone to even see it yet!  I know that you're all going to tell me about the economy and how bad it is, but that really won't relieve my disappointment, now will it?

The people from England...who knows?  Never heard from our Realtor on that other than to answer all of their questions.  Apparently, they didn't like the answers.

Then there was George and his wife who appeared in the driveway one night wanting to see the place.  Nope.  Haven't seen hide nor hair of George or his Realtor.

I will tell you though that keeping this place clean and spotless has become a full time job...especially when you have a man like the Pres who does NOT wipe his feet!  Last week I wanted to hit him in the head with the vacuum cleaner wand!

All I've been doing is cleaning the house, primping the garden beds, weeding and spraying for Japanese Beetles!  Yesterday was the first time I went to the Y in a whole week.  I didn't care.  I decided that I had to go and get some heavy duty exercise and so I did.

However, getting in my car, I noticed a missed call and a voice mail.  They were from the Pres.  Trust me, when I tell you this...he NEVER calls me.  I listened to the message which said that someone was coming over between one and two which meant we had to hit the road, taking the dogs with us.

Pulling in the driveway and hitting the garage door opener, I first noticed the Pres heading for his truck with the trash from the garage.  Hallelujah, I thought and I headed into the house.  It was 12:30pm.  Immediately heading upstairs, checking for anything out of place (specifically dead stinkbugs), I turned on the ceiling fan and light at the top of the stairway.

Then it was the family room to gather up his newspaper and dirty glass.  Now for a quick wipe down of the kitchen counters (apparently the Pres had made a sandwich for lunch) and sink so they were no water spots.  Peeking in the mudroom, I saw that it wasn't too bad...except for a few big clumps of dried mud (apparently the Pres had been in the garden).  Those were "gone in sixty seconds".

Making my way down the hallway to the bedroom, I took his bath towel and folded it, placing it on the vanity near his sink (apparently the Pres had showered and hung his towel on the bed frame to dry).  Entering the walk-in closet, I grabbed a pair of shorts and a top, changing into them quickly and heading out the door into the garage, key in hand.

The Pres had put the dogs in the truck and was headed somewhere while I was heading to Roanoke to pickup a few things at Wal-Mart.  We were out in record time for Chinese Fire Drill 101.  Looking at my watch, it was 12:47pm as I headed down the freshly grated road. 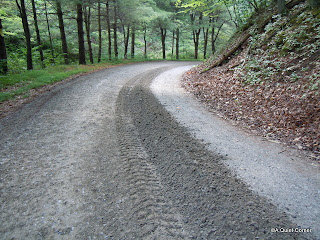 carol l mckenna said…
Selling a house is sure an ongoing Saga ~ but hey, maybe this will be a short one ~ I think this blog might help promote it with the photo you have at the top of the page ~ It is a great one. Are you really going to move? Wow! ~ Wishing you the best in the day ^_^
June 29, 2011 at 6:44 AM

Sandra said…
hope this turns out well for you. i am sorry but i had to laugh all the way through your story, it seems you may have my husbands twin brother for a husband. WHY do they make a sandwich and not wipe the crumbs, or wipe the clumps of dirt and why do they drape towels and shirts on furniture? if you ever figure it out let me know. hope you got a live one, waiting to find out in the next chapter.
are they advertising your place online, that is where property sells as it can be seen all over the world. if not then it should be, most of the world today searches on the net first and looks last.
June 29, 2011 at 8:31 AM

Tiggeriffic said…
IT sure is a lot of work keeping one's house clean for people to come and look.. Did you make some bread ? so your house will smell good. They have candles now that one can burn that makes your house smell like baked bread. or smell like apple pie . Hope you were able to get it sold.. Have a open house like Lisa suggested ~ that usually draws people to your house.
Have a Blessed Day~! ta ta for now from Iowa:)
June 29, 2011 at 1:11 PM

Ms. Becky said…
oh, it is not fun, having you home on the market. I drive past homes in my neighborhood that have been for sale for over a year. it depends on the house and the location. by the looks of it, you have nothing to worry about. it may take a bit of time, but you have what most everyone wants! love your recounting of the fire drill. hang in there, and keep taking lots of photos!
June 29, 2011 at 3:49 PM

Angela said…
I would have to move out of our house if we ever wanted to sell it! I'd never be able to keep it clean enough for someone to look at it!

I hope they buy it! If they don't you could always make a special blog just for your house. Put miscellaneous pictures and information about it. I also remember years ago that there was some place that would list just log houses that were on the market.

Texan said…
Girly I so understand that keeping the place spotless and well the honeyman being like your Pres. well lets face it... they just do not get how neat and tidy a place needs to be to show! As in perfect and spotless ... it does make a difference I think and it can be SUPER frustrating trying to keep a place like that! I realllly do feel for ya.
June 30, 2011 at 6:25 PM