so head on over to Angela's for her Tuesday's Show & Tail that she hosts each week on WVTreasures to share your tales about pets, animals.  Today I'm telling a story about your friends and mine...that family of Chipmunks that live under my garden in the front yard. 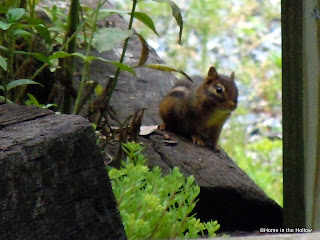 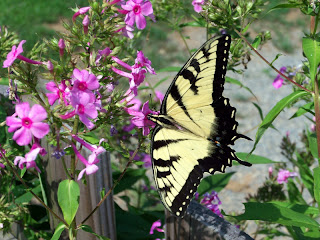 Clipping the dead leaves and cleaning up the early bloomers, I spotted HIM.

However, once he spotted me, his tail bristled and became erect as if to tell me that I was trespassing!  Squeaking loudly, he then vanished into the tall Phlox. 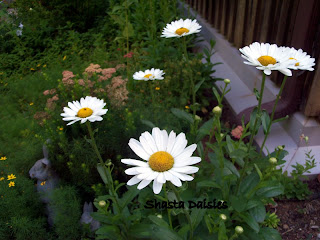 Continuing to clean-up the front bed, I waved to one
of my neighbors passing by.  She pulled into the driveway to chat and catch up on things.

Telling her of my plight against the furry beasts, she laughed and said, "There he goes!"  We both watched him scoot across the railroad timbers that edge the garden bed and take cover into yet another good hiding spot behind the Shasta Daisies. 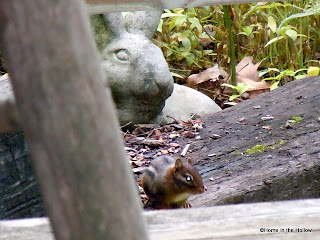 My neighbor left, I finished up and carried the clippings over to the decaying pile near the edge of the back creek.  Then I decided that I deserved a break, so I sat on the bench on the front porch, camera next to me.

Good gravy!  It was HIM!  There HE was...waiting for me to leave his yard!

The battle is not over.  There's always tomorrow.   Perhaps rather than my camera, I'll be totin' my Ruger.  Did I ever tell you that the Pres calls me Annie Oakley?  Remind me to tell you that one some day.
Email Post
Labels: Critters Gardening Mother Nature Virginia

Angela said…
Aw, JP he is cute! Keep your gun in the house Annie! lol He's not a killer like the wild beast around my house! lol My husband won't let me get a gun to take care of those killer wild beasts that get trapped in the trees from our dogs. How did you get the Pres to let you have a gun?

Betty said…
I hope you're kidding because he won't hurt anything. We don't have chipmunks here and I wish we did because they're so cute. We had them in NJ when I was growing up, but I guess it's too hot for them here.
June 21, 2011 at 11:03 AM

Nancy C said…
Besides being adorable, what else is his crime? ;)