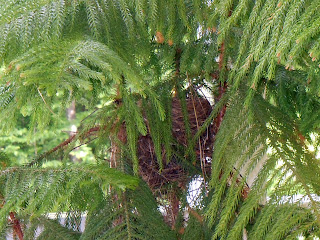 While staying with my friends, I noticed that they had placed their Norfolk Pine (which is usually in my room) out on their wrap around front porch.  They have an absolutely BEAUTIFUL home!

As we were rocking in the chairs just chillaxin', her husband came out with the dogs and as he pointed to the Norfolk Pine, he said, 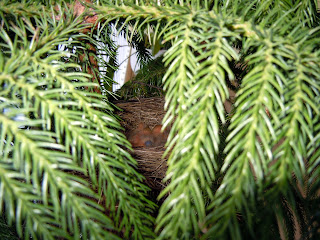 "Did you see what's in there, JP?"  Moving in a little closer, I saw the Robin's nest that held four little ones!  (You have to look closely at this picture because they almost blend in with the nest.)  Anyway so each day, morning and night, I would peek out of my window to see what was going on...if anything.  Sometimes, Mama was sitting on them, sometimes near them while other times she'd be feeding them.

All was calm and peaceful here in "the Quiet Corner" as the days went by.  But then one day towards the end of the week, Mother Nature got annoyed about something and paid us a visit.  With her, she brought along a lot of extra baggage in the form of heavy rains and very strong, gusty winds.

My friend's husband had gone out that evening so it was her and I and the three dogs, two of which are afraid of thunder and lightning.  While she comforted one, I tended to the other.  Watching the local news, many people were without power across the state...especially in the Northeast corner.

However, when I went into my room to get something, I noticed the Norfolk Pine had been toppled over by the wind!  Yelling to Bette that I was heading outside to "save the children," I made a dash for the front door, only to find that two of the newborns were huddled near each other on top of one of the branches that now lie on the deck flooring.

Then I noticed that one was hanging on for dear life still in the nest.  The fourth?  The poor little thing was lying spread eagle on the cold hard deck floor under the branches!  Dashing into the house to get some paper towels, I scooped the two up and crammed them into the nest on top of the one who was in there as I up-righted the tree.  Cradling the fourth in the toweling, I tried to place him in the nest, but one leg protruded up and over the side.  I was worried. 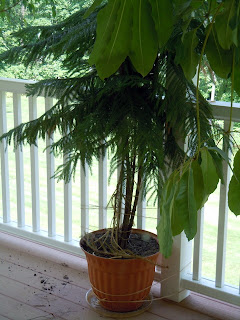 After Bette's husband got home and telling him what happened, he and I worked to secure the tree to avoid repeat accidents.  The next day, he told me that the fourth one's leg was tucked in and was as secure as the potted Norfolk.  Ah, it's nice to have a happy ending...:)!
Email Post
Labels: Birds Friends Mother Nature

TexWisGirl said…
glad you saw them before they were out exposed for too long! poor little ugly naked ones!
June 17, 2011 at 9:44 AM