Normally I do not go to the gym on a Saturday.  However, just when I was walking to my car after picking up a few things at Wal-Mart, my cell rang.  Before I could get it out of my new tiny yellow purse, it had gone to voicemail.  It was close to 10:00am.  Yep, you got it.  It was the Pres calling from his Oval office and you know what that means, right?

Yep.  The Realtor called and said sometime between 10:30am and 12:00pm, they would be bringing folks over.  Asking what the Pres was going to do for an hour and a half with the dogs, he told me he was going to cut Margaret's grass, taking the dogs with him.  Now what could I do with myself?  The answer came fast.  Knowing that I was going to loose Monday next week becasue of the holiday, I decided I would head on over to the gym and work up a Saturday sweat!
The ligament in back of my left knee has been bothering me lately so when I jumped on the elliptical I decided not to push it, limiting myself to thirty minutes, varying the resistance from a one to an eight and the incline from a one to a eight as well.  That simulates my walking up the gravel road and at a nice steady pace, it's great cardio.  Then I hit a few of the resistance machines and a few free weights.

Arriving back at the house shortly after twelve, I parked out in front.  Two cars blocked the garage bays.  One had Virginia plates...the other New York.  It was a Caddy.  Nice people, really nice.  She complimented me on the gardens and then said, "that's a lot of work."  I wondered if they had yet learned when "work really isn't work but rather pleasurable joy."

He told us he's keeping it on his list.  They're from Long Island are are looking for a "getaway" that only takes one day to get to.  We told him just what he wanted to hear.  "It takes 10 hours to get to Connecticut."
He took a ton of photos while he was here and walking the twenty acres with the Pres.  Before they left, I suggested that he take a picture of my Eastern Phoebe and the second brood.
He did. 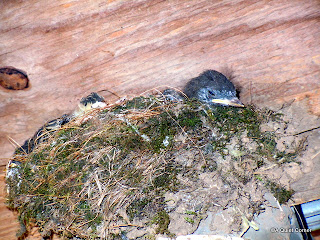 gld said…
Curious about the one day drive thing!

Anyone who sees your beautiful place would have to fall in love with it.

Jill said…
Feel better and crossing fingers they snatch your beautiful place up in a hurry!
July 5, 2011 at 9:39 AM

Annesphamily said…
I hope you get the seller you need. I am sure you will find someone who will love your place. Thanks for updating us. Anne
July 5, 2011 at 3:15 PM

Angela said…
I hope your leg gets better JP! Wow! That's very interesting that they are from New York and want to buy a second home! Hope it's yours!

Ms. Becky said…
oh, just the right people for this beautiful spot will come along. when I was selling my 20-acre farm I sat down and wrote a letter to any prospective buyers which I then gave to my Realtor to pass along. I wrote about what the mornings were like, the walks around my land that I took with my dog, how the sun looked throughout the day, the sound of the rain on the metal roof, etc. all the wild berries that I picked each year and made into jams and jellies. it was a personal touch just to let whomever know that it was so very special. it worked like a charm. the people who purchased my farm told me at the closing that the letter is what sealed the deal. so you may want to think about doing something like that. just a thought. you have a little slice of heaven, and the right person will walk through your door very soon. I just know it. have a good week!
July 5, 2011 at 9:33 PM

laurak/ForestWalkArt :) said…
well i've got my fingers crossed for ya! i know it'll be such a relief when a buyer finally says "Let's sign!"

ok...now about the picture...i clicked to enlarge and still am not sure what i'm seeing. at first glance it looked like a dead bird...then i thought, nah...it must be a nest. but it looks like it's on the floor...
i think my perspective is all off!