"Just a Small Piece," said I

Retiring at the age of fifty eight, I had a lot of energy to burn up and what better way to do that that to join the local Y.  And so I did, as you know.  Meeting many, many wonderful people there has been a true blessing for me, as socialization is not only crucial throughout our lives, but especially as we age.

There he was.  Sitting alone on the bench, hunched over, cane in hand, right outside of the walking track.  He had the gentlest smile on his face as I said, "excuse me" passing by to sit down on the opposite bench to talk to "Santa."  In fact, it was Santa that introduced Robert to me.  He and I just hit it off right from the beginning, talking about work, retirement, medical issues and of course, plants.

Well, we've been talking for about five years now and he is one of the kindest human beings I've ever had the opportunity to meet.  One day, he remarked about the top I was wearing saying that it reminded him of the bright pink flower one of his many cacti bear.  Of course, he knew how I loved plants regardless of what kind they were and so as we talked I explained that I'd never had much luck with them.  He went on to tell me how he's given pieces of this particular one to his friends all across the country.

Telling me he was going to give me a piece of a cactus for me to try, my immediate response was, "Just a small piece Robert.  Just enough for me to see if I can get it to grow."  Since we both exercise on the same days, we agreed he would bring me in a "cutting when it was time."

Walking into the resistance room, there he was and openly said, "JP, before you leave today, remember to take the cactus out of the trunk of my car.  I'll unlock from up here with the remote."  Finishing up for the morning and saying good bye to everyone, he hit the button on the remote and I descended the staircase.  What I was expecting was, to tell you the truth, a small piece.  Robert had warned me not to grab the sides of the bag and only use the handle to avoid getting pricked.

Lifting the lid of the trunk, I spotted this huge doubled plastic bag with my "cutting" inside. This is what it looked like when I planted it following his instructions to the letter. 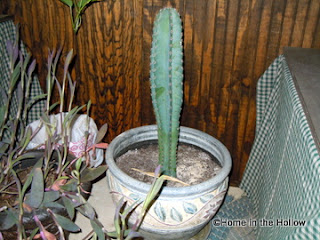 Of course, it is now outside on the deck for the summer months and apparently is happy as it has grown substantially in this short time.  Thank you, Robert.  Another friend made and always to be remembered.

Jill said…
This is such a lovely story! You and Robert were fortunate to have met and bonded the way you did. Life has many wonderful surprises.
July 13, 2011 at 6:36 AM

Anonymous said…
And now you have a somewhat prickly reminder of your friend. One thing nice about cacti, they don't require too much maintenance.
July 13, 2011 at 7:09 AM