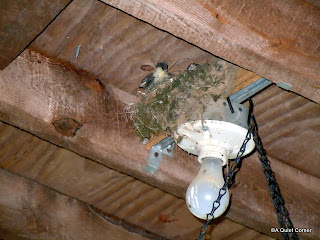 No, not me, although I would say that I'm close!  LOL!!!  It's my second batch, brood, bunch, go round or whatever they're called.  Can you see in this photo, how the nest is separating from the board (just like last time!!!) and sliding off the damn darn light box?

Being a concerned citizen, I did my best to brace their fall, if in fact that happens.  So, I went into the garage got a cardboard box and lined it with pine straw that I gathered on my hands and knees while trying to avoid getting stung by those damn darn yellow jackets.  Placing the cardboard box inside an old wooden crate that was hanging in my family room, I then positioned it on top of a ladder directly under the nest and hanging basket, which, by the way is full of crap bird droppings! 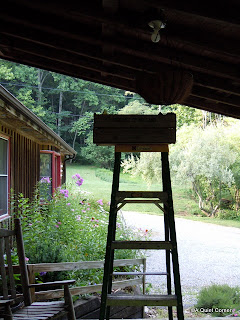 Watching the four little ones today, I noticed how they take turns, sit on the falling edge of the nest and flap their wings.  I'm hoping that they'll be flying soon...:)

Oh, one more thing.  Did I tell you that in performing creek clean-up, I saved about thirty five craw-fish?
Email Post
Labels: Birds Mother Nature Virginia

Lisa @ Two Bears Farm said…
You are so sweet! Like the fireman with the trampoline, you're there to catch those baby birds!

Anonymous said…
You have a heart of gold my dear. The things you do for mother nature when she is caught napping.
July 8, 2011 at 5:14 PM

Anonymous said…
As you know, I am a follower of yours. For some reason the google connection between us is broken and I am not getting your posts on my reading list..nor can I access your blog from my reading list..soooooo I am going to unfollow you and then refollow you to see if I can fix the connection cause DANG I have missed a whole bunch of your posts. Anyway, just thought I would let you know so when you saw that I had dropped off you wouldn't be hurt. I am coming right back. Promise.
July 8, 2011 at 5:39 PM