I can't even begin to tell you about the number of houses that we looked at.
As I mentioned a while back, the Pres was really impressed with the young builder when we met with him that day at the building site.  Since the Pres built houses in between "playing firefighter" back in 1802, he really has the expertise and know how when it comes to construction, so he knew what to ask and understood all the answers.

Red Oak flooring throughout the house, with the exception of the two bathrooms, which will have ceramic tile, was part of the original specifications as well as many other unique trademarks which are the builder's "signature".  This  builder has worked in the industry since he was fourteen, which is when he began working with his father.  He is President of his company, which is renowned for energy efficient home construction.  Both the Pres and I knew that now that we are in our "golden years," we would be safe, snug and secure in such a home.

The offer was made. 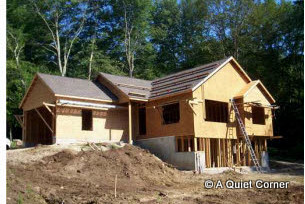 Our focus had been on the Northeast corner of Connecticut all along.  Once the offer was made, I "Googled" the county and town in which the house is being built.  "...known as "the quiet Northeast corner", Windham County is primarily known for its serene countryside and abundant dairy farms..." That, my friends was AFTER I'd changed the name of my blog from Home in the Hollow to "A Quiet Corner."  I think it was just meant to be.

Here was the pot of gold we'd been searching for...right here at the end of the rainbow.  We had struck it rich and finally found a place where, once again, a house would became a home and where, once again, adventures would evolve!  The offer, including some "upgrades" as the Pres calls them, was agreed upon!!!

Yes, set on 3 and 1/2 acres, this will be our new home.
A Quiet Corner has been found.
Email Post
Labels: Connecticut Family My Life Rural America Teamwork Virginia

Bruce Clark said…
Looking forward to having a fellow blogger from "The Quiet Corner", JP. Where is the new house located?
August 20, 2011 at 7:49 AM

Sandra said…
congrats on your NEW home as you move from your very OLD home. looks like you have a little property with it and room to move a few pets and plants
August 20, 2011 at 9:02 AM

Lisa @ Two Bears Farm said…
What a cute place, and it'll be nice to have a place that is lower maintenance too. I'll be excited to see pictures as it progresses!
August 20, 2011 at 11:14 AM

Rusty said…
Now that sounds very interesting. That house, (soon to be home)- seems to have everything going for it - except someone to call it home. I'm waiting with baited breath - just as I'm waiting for our move to the Laurentian 'wilds'. (Grin) ATB!
August 20, 2011 at 1:13 PM

~Kim at Golden Pines~ said…
Some things are really meant to be, and this one, certainly is!! It sounds perfect and I can't wait to see pictures of the new place you'll be calling home!!
August 20, 2011 at 3:46 PM

Angela said…
That is going to be really nice JP! I'm sure you will love it! We built our house. You are going to have a lot of fun picking out the different things you want in your new home. Can't wait to see more pictures of your new home!

Anonymous said…
I guess you may want to add a facebook button to your site. I just marked down the url, however I must complete this manually. Simply my advice.

Nancy C said…
Catching up with all of your news today, JP. I was hoping you posted a photo of the new home. It looks wonderful -- nothing like building from the ground up and getting all of the niceties you and your hubby want. I'm excited for you! :)
August 23, 2011 at 7:38 AM