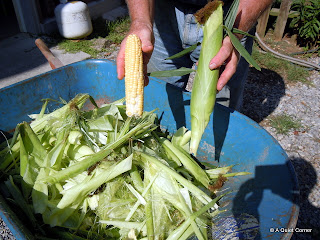 Taking some time out from regular housework today, I gave the Pres a hand.  It was time...not to make the donuts...but time to make the corn. 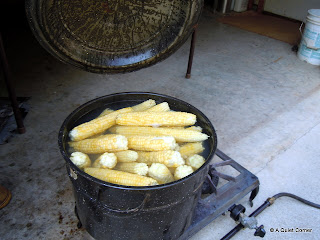 Shucking the eight dozen ears was step number one.  Then it was time to get the water to a rolling boil before placing in the first batch.  The corn is then boiled for about five minutes

The corn is then placed into the cold water bath where it sits for about another five minutes. 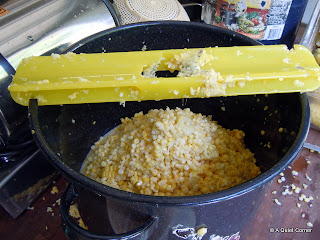 The next step is to remove the kernels off the cob.  The Pres does this part because my hands are too weak.  However, don't think I'm sitting resting somewhere.  I begin the bagging process as soon as there's enough in the big blue pot.

While doing this, the Pres made a suggestion.  Next summer, the kids can come over and we'll all do this together.  That will be fun!

Using one of my old antique scoops, the bags are filled with a pre-determined number of scoops, then after squeezing out the air and zipping them up, they are labelled and stacked in the freezer.  We got twenty two bags added to the existing supply of twenty.  Not bad for just plain corn.
Email Post
Labels: Family Friends Gardening Rural America Shopping Teamwork Virginia

Sandra said…
this takes me back in time when mother used to with my help do this to corn. yummmy and there is so much info here i did not know and i have always wondered why some ears have no kernels and some have them all. now i know. did not know about the strings either and that was the part i hated the most, removing them
August 21, 2011 at 7:42 AM

gld said…
Just like I do, but I leave most on the cob and my Pres does not assist!
I just read on another blog the tip to stick the cob in the center of a bundt pan to cut off the kernels, they just fall into the pan. I will try it next year if we have a good year.

SharleneT said…
Just in case you weren't sufficiently tired after removing all those kernels, I hope you didn't throw the juice away... I like to save it in vacuum-sealed bags of 1/2 cup each to add to soups etc. It's surprising how just a little corn juice adds to so many meals. Sort of rounds it out. Now, I guess, you're going to have to start all over... Come visit when you can.
September 1, 2011 at 8:08 AM