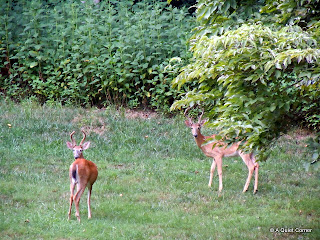 Two young bucks wondering what the heck I was doing as I climbed the small hill.  Have you have tried to remain in a crouched position and climb a hill while dodging from one apple tree to another to attempt concealment?

It wasn't easy let me tell you.  What made it even worse was hearing the snickering from our neighbor and the Pres watching me from the deck!

Suddenly the two males picked up their heads and remained focused on me until the noise startled them off.  Running onto the well treed perimeter, they were gone.  Gone...all because of the noise made by none other than Mountain Moon.  Once she saw that I was approaching danger, she made a bee line for the fence, barking, telling them to get lost!

Moon has become quite the companion lately.  In fact, the other day the gentle woman who loves down the road was jogging by with her dog.  I went down the driveway to chat a bit and the next thing I knew Moon was out of the fence and barking, fur up along her spine, at my friend's dog.

Where did she come from?  How did she get out? I asked.

My neighbor responded, I saw her climb the fence.

I guess this little Shepherd Husky that strayed into the yard seven years ago has become attached.  She scaled a four foot fence just to protect me from the mean jogger and her dog!  I'm definitely taking her with me.  She'll fit in nicely up in Connecticut.  You have heard of the UCONN HUSKIES haven't you? 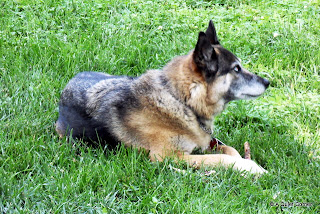 Karen thisoldhouse2.com said…
What a nice story, so glad she's coming with you. Here in Connecticut Huskies are EVERYWHERE.
August 11, 2011 at 7:41 AM

TexWisGirl said…
glad she didn't ATTACK and just menaced them! what a sweetie. and LOVE the deer (even tho you were snickered at to get the shot!)
August 11, 2011 at 8:59 AM

~Kim at Golden Pines~ said…
Great shot of the deer!!

gld said…
Dad used to have a fence climbing hound dog! Oh yes, she has to go with you.

Love the picture of the deer. Makes you appreciate what wildlife photographers have to go through to get those amazing shots.
August 11, 2011 at 12:25 PM