Over filling the measuring cup as usual and carefully holding the excess with my free hand, I watched Moon waiting patiently for her morning food.  Then, stepping out of the shed I noticed something in the distance.  There, nibbling in the tall grass was one of the many rabbits just chomping away as if the dogs and I were not even in the yard.  It was only about twenty feet away, as I watched it twitch it's ears with every little spoken word I mumbled to Moon. 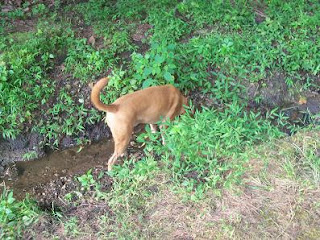 Where was Copper, the wonder dog?  Since he is a sight dog, usually he'd be running after anything within the perimeter of the fence as soon as he spots it.  Gazing around the yard, I spotted him.  He'd apparently found something a little more interesting over at the creek...probably one of those slithering creatures that suns itself along the banks in the morning sun.

"Rabbit" I hollered.  Nothing.  Absolutely nothing.  No reaction whatsoever.  Then I thought, I'll know how I can get him to focus on his real job.  "Copper...SQUIRREL," I yelled.  His head popped up from the shallow creek-bed and he was up and over the bank in an instant.  Gone in sixty seconds...running across the yard using his tail as a rudder!  Of course, the bunny was long gone as it had hopped right through the fence posts.

Sandra said…
so copper is sight and moon is scent? Baby girl is scent, and Jake is sight. he can spot a moving lizard a hundred feet away, but his scent does not compare to Baby, she can track where a snail crawled, we like to watch her follow where we know something walked or crawled
August 6, 2011 at 3:53 PM

Old Time Cindy said…
LOL! Our dogs are related. Everytime I yell 'squirrel', my Dale Boy comes running as hard as he can. Hates squirrels with a passion.
August 6, 2011 at 4:13 PM