As I walked up the driveway, he came running.  Barking and running right towards me, he was getting close, so I called out his name.  He stopped...looked surprised as to how or why I knew him, then began running circles around me, as he growled, then barked, growled, then barked, continuing to dart here and there.  I threw a few sticks for him and he liked that, but never brought them back to me.

Assuring him that I was there to take care of him and his feline friends, I unlocked the door only to be greeted by one of the most lovable cats I've ever met.  Reaching down to scoop him up in my arms, he purred and rubbed against me, making both of us feel good.  He needed to have medication, which was accomplished quickly, without incident, I might add.  Meanwhile, as I gave the cat his medicine, the dog looked on from the deck outside the slider. 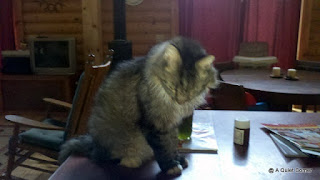 Next task...on to the others downstairs for fresh food and water.  Greeted by another good buddy, the huge black monster of a cat, I petted him until he was melting, purring and rubbing against my leg.  I never saw the others.  Gosh, I hope they were alive!  They must have been because the three dishes of food showed signs that something had eaten it.
Now it was time to feed the pooch out on the deck.  Opening the door, he greeted me with an entirely different demeanor than he had when I came up the driveway.  Wait a minute.  What did I just say?  Did I just say that the dog greeted me as I stepped out onto the deck?  He couldn't have.  How the heck did he get there?  The gate, a large heavy six foot gate, was shut...solidly.  How did that dog get on the deck?

At first I thought, the gate was just that easy to open and close.  Wrong.  Because I couldn't get it to budge.  Then I thought, perhaps the owners of the house had put in a staircase from the yard (the deck is on the second story) and he scooted up the stairs.  Walking completely around the deck with the dog at my heels, of course, there were NO stairs.  How did the dog get on the deck?  I know he didn't follow me in through the house, because I specifically told him go around.

Sonya @ Under the Desert Sky said…
Can't wait to hear the explanation!