As you know we left early Wednesday morning last week, planning on getting to Connecticut around 5 pm.  Aside from the tow straps coming off one tire on the Wrangler, the trip was a good one.  We had made earlier arrangements with my son to meet him at his new home so we could drop off a few things that they could use and we needed to eliminate.  It wasn't much and hardly made a dent in what we need to sort through, but it was a start.  In the back of the truck was a full size mattress and box-spring, fire place tools, and the hot ash vacuum, along with a special surprise for Mia, of course! 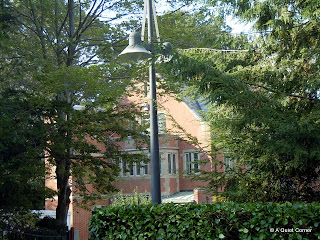 They bought a house in Litchfield County that was more convenient for them for work,Mia's day care and his in laws.  Driving by one of the well known private schools, I couldn't help but snap a picture.  The Prez seemed to negotiate his way through the streets as if he'd been there before, but I was giving him far too much credit.  He had the GPS plugged in and positioned on his left so I couldn't see it!  Typical man, though, he kept taking the kudos I freely dished out about how good he was at directions, considering we hadn't been in this area of Litchfield County in almost ten years! 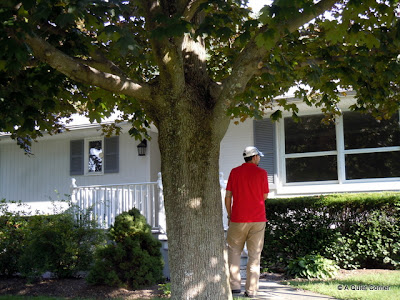 Although my son wouldn't let me take many pictures on the inside, because the painter was working and my son didn't want the photos to reflect the previous owner's choice of white throughout the entire house.  I thought, oh boy wait until he sees that we selected Muslin throughout the new place!!   I was able to snap a few before he took my camera away. 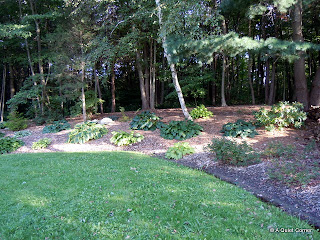 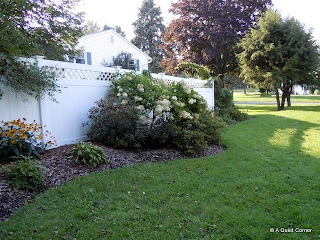 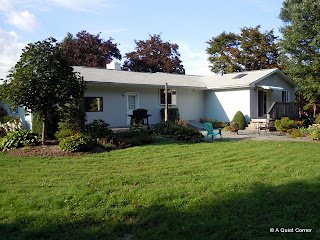 He has a well manicured yard with lots of mature perennials, a good sized deck off the family room as well as a great stone patio that then ties into another deck.  Once we unloaded his stuff and my DIL showed up with Mia, I dropped the adults like a hot potato!

Mia, would you like to see what Nana has for you?
Nodding shyly, she reached for my finger as I put out my hand and off we went with Daddy to the truck, as it was his job to carry the linen hamper. 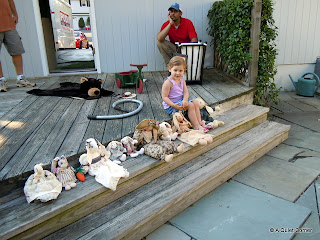 Reaching into the hamper, her little eyes would light up each time she drew another out.  Unpacking all of the bunnies and lining them up, she then plopped right down on the step next to them.  I just couldn't resist and for this shot, my son gave me my camera back.  I'm was glad.

I was also happy...not just that Mia liked them, but that now the bunnies had a new home.  They were, once again, wanted. (See Jane: A Story )

We went back again Saturday to give him a hand unpacking the POD and placing everything neatly into his garage, as the painter still was not finished.   As he, the Prez and I worked, he said, so, I have to say, we're glad that you decided to move back.  Listen to me, Mom, getting all emotional.

Louise said…
Awww, what a lovely post. I'm glad that Mia is loving the bunnies, and I'm glad that your family is going to be close enough for easy visiting.
September 6, 2011 at 8:26 AM

TexWisGirl said…
congrats to your son and his family for their new home - and beautiful deck - full of bunnies and a little girl!
September 6, 2011 at 8:31 AM

Beverly@Beverly's Back Porch said…
I'm so happy you will be closer to your family. I would not want to see you miss one moment with Mia.