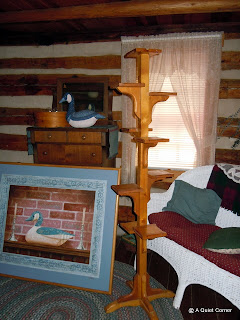 The attic.  The dreaded attic.  But I knew that I'd better get the stuff out of there on a cool day, so I headed in.  My attic is relatively empty with just a few odds and ends.  However, some of the "odds and ends" are coming with me when I move.

One of my dearest friends, when I worked at the bank, was a fellow who came on board through the acquisition of another financial institution.  He landed a job in the department I was in, Branch Administration.  We hit it off right from the start.

In fact, he'd invited me to their house to meet his wife, son and daughter, even the family dog, a Wheaten Terrier.  They were wonderful to me and we shared many laughs, Nick and I.
I can't remember how long I'd known him when tragedy struck.

His nine year old daughter had been over my house several times and in fact, admired a stuffed animal from my old bookcase so much that when I told her she could pick which ever one she wanted, she selected the stuffed Cow in the blue velvet dress and white eyelet pantaloons.  Nick told me that she brought it to school for show and tell and carried it everywhere with her.  We never knew why.

Anyway she came home from school Wednesday and that night Nick got a call from the Principal, who said that they were going to give her the "Good Samaritan Award" on Friday night.  Nick and his wife were so proud and knew that she would be so surprised.  You see, she had given her "book" money to another little girl who had none.

Well that night, Nicole went to sleep only to wake up around midnight with terrible pains in her head...pains that were so severe, they made her sick to her stomach.  Nick called his wife, who worked at the hospital, who instructed him to bring her to the ER.  Cole went into a coma and never came out.  She died the next day.  The cause?  A brain aneurysm.

The wake and funeral were so terribly sad...so tragic.  As I approached the open casket, there lay Nicole with her small hands folded across her chest, holding her rosary beads.  Nestled under her arms was her favorite Cow in the blue velvet dress.

This plant stand was built by Nick, his Dad and Nicole.

Oh, and Nick.  He committed suicide a few years later.  He tried so hard, so very hard, to live without his little girl, but after his Dad died, he just couldn't wait anymore.  He wanted to be with them.

Karen thisoldhouse2.com said…
oh, what a story. Aren't you glad for the joy provided by the simple act of giving the cow to Nicole.
September 20, 2011 at 7:01 AM

Anonymous said…
An extremely heart breaking story. It would be good to take the plant stand out of the attic as long as now when you look at it you only have good memories. If it only brings sadness to you when you look at it, it may be time to let it go.
September 20, 2011 at 8:04 AM

Becky said…
So sad,we should always make each day as good and positive as we can.Because you never know,only God does.
September 20, 2011 at 9:11 AM

TexWisGirl said…
oh my word. i cannot imagine the pain his wife went through in such a short few years... i am grateful you were able to share joys with him before the pain...
September 20, 2011 at 9:17 AM