Knowing that our first trip is slated for next week gives me a wonderfully nervous feeling in the pit of my stomach as I listen to the Prez talk about his plan for "the move".  Earlier in the week, he had the brake mechanism installed in that big red Dodge diesel of his and today he got to bring his new trailer home.  We will begin loading the trailer over the weekend. 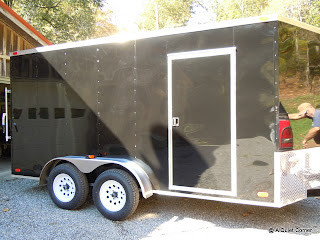 Well...that's what he said, anyway.  After the Prez got the lights and brake connected, he said, "We'll start on Sunday."  But then looking into each other's eyes, the small grins came across our faces and we started working on this... 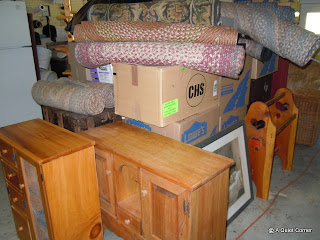 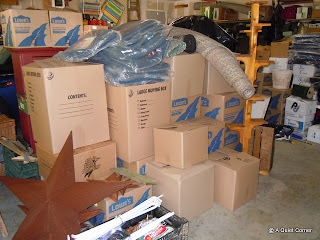 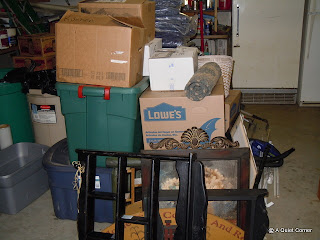 The dressers and beds will be loaded over the weekend along with a few other larger items.  The Prez just wanted to stack some of the small stuff to fill up the "nose."  As you can see, we've been busy.

When we shopped for groceries last week, we intentionally planned out our meals for next week since we will not be bringing any foods requiring refrigeration on the first trip.  The dogs will remain here under the watchful eye of our neighbor who will, as always feed and play with them in our absence.  The closing is scheduled for Friday, the 21st however, we are meeting our Realtor at the house for a final walk~through earlier that afternoon!!

I've come to the conclusion that Moon and Copper know some thing's up as they keep seeing things getting boxed and then carried out to the garage.  In fact, they've been what I call hugging my leg when I go outside with them.  It's as if they are saying don't forget me.  Good gravy!  How could I do that????  They are not coming until the second trip however, because the Prez has to build the wooden part of the fence all around the front of the house.  He'll do that on the first trip up.

Oh, one more thing, I'll be disconnected for a while because of no Internet service.  That should be early next week.  I'm a little concerned about that to tell you the truth because our builder told me last night that the cable/ISP up there may take up to seven weeks for an install!!!  YIKES!!!  It looks like I'll have to get a library card right away...:)

How exciting to be this close to the new adventure.

Oh, Moon and Copper..you would never ever be forgotten. They built your fence before anything!
October 15, 2011 at 7:55 AM

Retired Knitter said…
Oh my. You are moving yourselves. That is a whole lot of work. Be sure to take many rest breaks. Moving is hard hard work.

Your dogs will be anxious and we both know they are going as well, but the dogs just don't know these things and sadly there are people who leave their pets behind (sometimes abandon in an empty house.) Those folks should be tattooed on their foreheads at unfit for pet ownership so no one ever allows them to take care of animals again.

Oh sorry. I am such an advocate for animals and I have seen many times when people fail them. Guess I got carried away.

TexWisGirl said…
oh, i always feel so bad when the animals sense what's going on and start to stress! good luck on the trailer full!
October 15, 2011 at 9:27 AM

Tiggeriffic said…
I remember moving to Iowa from Ohio.. I rented a huge U-Haul truck and drove 17 hours to our rented house. Dave and one of the kids had to stay an extra week in Ohio. Had people once I got to Iowa to help me unload.. That is a move I'll never forget. The 3 kids I had with me were never so glad to go to bed that night.
Sounds like you and the Pres have things all organized and ready to go..on the first trip..
No internet? Library is a great place to go for a little bit.
Have a tiggeriffic day~ ta ta for now from Iowa:)
October 15, 2011 at 1:04 PM

laurak/ForestWalkArt :) said…
you just never really realize HOW MUCH you've accumulated 'til it's time to pack up and move on....

moon & copper...yeah, i'm sure they sense something's going on...with everything you own in boxes! just keep giving them those xtra kisses...they need that assurance right now! :)
October 17, 2011 at 11:52 AM