Shortly after I got in the house on Thanksgiving morning, the phone rang.  It was my daughter.  Worried about Moon, I really was not in the mood for chit chat.  She immediately said that I sounded cranky.  Holding back the ears, I replied, "I'm not cranky.  I'm worried about my dog."  Of course, once I explained she, too, wondered what could have happened to Moon.  "Try not to let it ruin your day, Mom" she said reassuringly.

We went to my son's and visited with everyone.  My granddaughter made me forget.  In fact, I was so consumed by her that I forgot all about Moon.  But reality set in quickly as the afternoon wore on and then I got anxious to head home.

However, when we arrived back home only Copper greeted us at the back gate.  No Moon.  She was moving as slowly as when we'd left Thanksgiving morning.  No change.  Again I approached and let her make the move.  Damn!  There was no improvement since that morning.  I was concerned that it might be a pinched or severed nerve in her spine if she had taken a bad tumble off the stone wall or landed the wrong way.

Friday morning though, a glimmer of hope appeared.  She let me at least remove her collar with only a short whimper.  In doing so, I felt along and around her neck for wounds.  Nothing.  No cuts.  No scabs.  I decided that the best thing we could do was to stay in the house all day and let her rest.  It was yet another warm sunny day and I noticed that she was basking in the sun.  In fact, it was if she was following it, always lying with the injured side facing the warm rayts.  Observing Copper only a few feet from her as if he was protecting her, reinforced the decision that we would stay in. 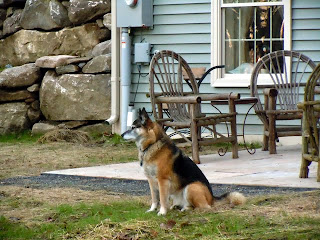 She remained in the sun all day and later that afternoon, her posture showed a huge improvement.  Seeing her sit on the hill near the patio, hold her head erect and straighten her ears, watching our neighbors intently made me once again be grateful.  When I saw the Saturday forecast, I was elated that it was going to be another sunny warm day in the 60's as was Sunday.  She would once again be able to draw on Mother Nature to repair her body.  Moon soaked up the sunshine all weekend and on Sunday morning when I went outside, she eagerly trotted towards me, taking my hand in her mouth just as she's always done since we found her seven years ago!

Moon was on the mend and would be back to normal in no time.  Although I'll never know what happened to her, I do know that my prayers were once again answered.
Email Post
Labels: Dogs Family

Bee Lady said…
Oh I'm so happy Moon is ok. So sweet of Copper to be a protector. I sometimes wish they could talk. I wonder what happened.
December 9, 2011 at 7:05 AM

Karen thisoldhouse2.com said…
I wonder if she injured her back getting up, down or jumping on or off something. sometimes once a spasm stops, they recover pretty quickly, but appear almost immobile while the pain/spasm occurs.
December 9, 2011 at 9:16 AM

laurak/ForestWalkArt :) said…
yay! a happy ending. so glad to hear that!

Beverly@Beverly's Back Porch said…
I'm so happy Moon is okay. Having a sick animal is like having a sick child. They can't tell you what's wrong.
December 9, 2011 at 9:54 AM

TexWisGirl said…
i agree with karen - sounds like she injured her spine - maybe jumping off a wall or something. SO GLAD she was able to recover! and you were smart to just let her be still!
December 9, 2011 at 10:07 AM

Sandra said…
this is unbelievable, a miracle in fact. i wonder what in the world happened, maybe a sprain? i got tears in my eyes reading this, and was so happy to get to the end after reading both post and finding she was better.
i still can not get your blog to let me follow you. i went on blogger forum and their are 4 others complain of the same thing, hopeful blogger will fix it soon. until then i will come when you visit me or try to remember to come find you. makes me crazy
December 9, 2011 at 1:57 PM

gld said…
I am so glad she recovered. Even my vet has told us most things will take care of themselves if we just leave them be. Moon know what was helping her.
December 9, 2011 at 6:24 PM

Sr Crystal Mary said…
What a beautiful dog and so clever. They know their needs more than we do. I have watched my little dogs, even on a hot day they will do some sun baking...they know where the Vitamin D comes from... Blessing to you I am so glad Moon has improved.
December 10, 2011 at 3:00 AM