Oh, What A Birthday Surprise...

Today is December 28th.  It is my birthday.  Now originally I wasn't going to bother writing anything nor was I going to tell you it was my birthday because you might think I was soliciting Birthday Wishes.  However...yep, there's a however.  Here goes:

Tuesday night we had a heavy rain storm come through our area along with fierce winds.  I guess it was about 10:30pm when I decided to hit the sheets.  And so I did.  I had just begun to fall asleep when I heard a series of crashes, scraping and squeaking like chalk on a blackboard.  I shouted out to the Prez.  And that was a tree, honey!

I no sooner got the words out and he was out of his comfy leather chair and heading out the front door, saying something like, "Lets hope it didn't hit my truck."  Meanwhile I headed in the direction of the noise I heard...toward the deck and said, It came from the back, honey...it's on this side where the dogs are! 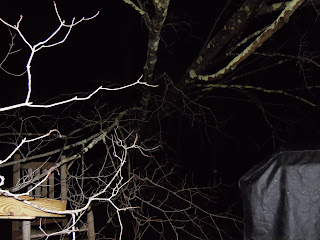 Turning on the outside light, I spotted Moon through the mess in the dark.  She apparently was awakened from a sound sleep by the crashing limb, bolted out of her house and was so scared she just stood there in the pouring rain and heavy winds.  The Prez broke off the smaller limbs blocking her door and I got her to go back in and settle down.  The damn tree on the edge of the woods, split and fell right on the house, with some of the branches right on top of her condo!!  Turning and walking into the dining room through the slider, the Prez said, We'll look at it tomorrow.

Well, "tomorrow" was my birthday.  Did I get flowers?  No.  Did I get a cake?  No.  But what I did get was a big surprise from Mother Nature.  I got a whole damn tree!  Come on now, gang, who could ask for anything more for their birthday? 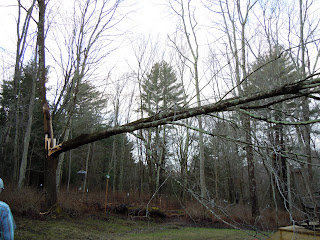 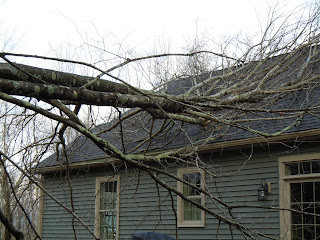 However, the best gift of all was, there was minimal damage to the house!  No damage done to the roof except for one shingle up on the peak believe it or not!  The gutter received a few "dings" but that was it.  The dents were small enough for the Prez to straighten them out along with the clips and it will work as good as new.  Of course, the hard part was taking it apart, piece by piece, branch by branch, severing the leaning trunk from the tree itself, cutting it bit by bit until it became manageable for the Prez and I.

We had accomplished quite a bit by mid morning when I called in reinforcements with a simple text message.  My SIL and BIL responded within three minutes and said they were on the way!  Yes, close is awesome especially for birthdays...let alone for tree removal! 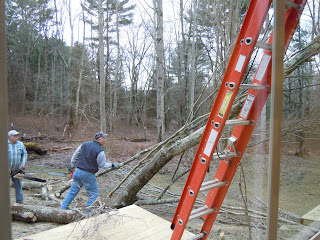 During the whole process, Copper wanted to play (what else is new?).  Moon, on the other hand took it more seriously and waited at the edge of the woods, safe up above the wall.  She was very relieved when I swept off the deck, placed her feeding station next to her house and she was, once again, able to relax! 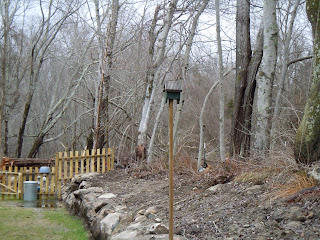 TexWisGirl said…
oh, you got very lucky!!! as did moon! poor thing!

well, happy birthday to you, JP! safe and sound with little damage is as good as present as anything purchased! maybe better!
December 28, 2011 at 7:53 PM

Chatty Crone said…
Happy birthday to you JP - and your gift was that you didn't get too much damage done to your house. Glad all is okay. sandie
December 28, 2011 at 8:44 PM

Beatrice P. Boyd said…
WOW JP, you sure know how to start a birthday off with a bang and a big one at that. Glad to know there was minor damage to your new home and that everyone, pets included were OK except for some frazzled human nerves. And a very Happy Birthday to you!
December 28, 2011 at 9:00 PM

Beverly@Beverly's Back Porch said…
Happy Birthday, late. You have certainly had some adventures in your new home. Hopefully they are all over. Glad no one was hurt and no major damage. Happy New Year!
December 29, 2011 at 7:52 AM

MadSnapper said…
i am so happy for you that your lovely new home survived with minimal damage and that the condo was not hurt adn the precious pups were safe. what a birthday present. hope you had a happy one before the storm.
December 29, 2011 at 12:16 PM

Betty said…
That was quite a birthday present...and you took that down yourselves??? Happy Birthday a little late. December 28th was my mother's birthday too. She would have been 91. My sister's was the 23rd and mine was the 29th. Hey...not everyone knows what it's like to get birthday presents wrapped in Christmas paper. :)
January 4, 2012 at 9:09 PM