One week after we moved in, it snowed here in CT!  The Prez had left for VA on Thursday and was planning on returning on Tuesday with the dogs and the second load of stuff which included the generator.  I had managed to put everything away from the first trip and the house was looking pretty darn good, I'll admit.

So that Saturday, while on the phone with the Prez, as I watched the wind whipping the trees as if they were mere reeds blowing in the breeze and the snow fall gracefully to the ground, there was a click and then silence.  The power was out.  I wasn't worried becasue I was just telling the Prez that I'd filled several containers with drinking water and placed them in the frig along with getting the flashlights and several candles out just in case.  That was the easy part.  I knew I had enough food and water...now I just had to think about heat and communication with the outside world...you know people like our kids.

Of course, the answer was simple, charge the cell phone with the car charger and warm up at the same time.  Thank goodness for heated seats!!!  I know you all heard about the power outages across the Northeast so I won't belabor the point.  I was fortunate though...very lucky.  It must have been that guardian angel that follows me.


Power or not, I did get some lovely pictures though...:) 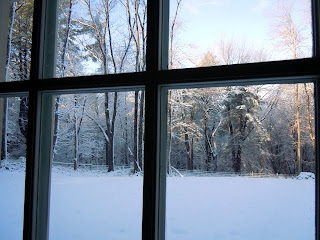 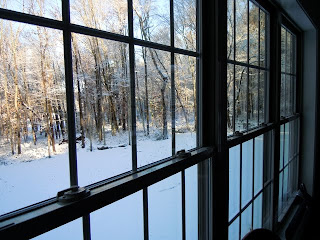 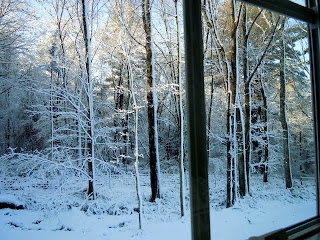 As you can see, it was a beautiful sunny day after the storm passed and we only got about 8 inches here so once the sun hit it, it was gone in a matter of days.  However, my son and daughter both got one and one half feet out where they live.  Across Connecticut, there were only a few communities that did not loose power.

On Sunday, the day after the storm, there was a knock at the door around 3pm.  I thought it was my builder but I was wrong.

Beverly@Beverly's Back Porch said…
I worried about you during the storm. Do you not have a fireplace?
December 2, 2011 at 5:39 AM

gld said…
JP, do you have lots of outages? You should check into the automatic generators. I would never be without one again! Ours is hooked directly into the propane gas line.
It was worth every penny.

I love seeing the snow out "your" windows....just now out mine quite yet.

Anonymous said…
Wow..you are into winter already. I see the odd flake falling outside here and all I can think of is going back to bed.
December 2, 2011 at 7:49 AM

Inger said…
I love your to be continued.....stories. Boy that was a lot of snow in October and pretty pictures too. At least you do get that from the snow. We got our first on 11/7, not very much and nothing since then. I am waiting and waiting...
December 2, 2011 at 10:29 AM

TexWisGirl said…
sounds like you weren't without power for too long! i had wondered about you then when i was hearing about conn!
December 2, 2011 at 12:54 PM

Sandra said…
these are gorgeous photos of the snow and the one through the front door is pure art. LOVE that door and your windows.
December 2, 2011 at 7:35 PM

Wsprsweetly Of Cottages said…
And I worried about a little wind! Oh but it is just so beautiful!
Now that I've gotten a glimps of those gorgeous curtains in your bedroom..I've afraid I am going to want to see MORE! :)
I found you on The Blue Ridge Gal.
Nice to meet you!
Mona
December 3, 2011 at 2:47 AM