Gosh, it seemed that I was away from Moon and Copper for ages when in reality it had only been ten days.  It was Tuesday and I was expecting the Prez late that afternoon.  He was making the ten hour drive with the dogs by himself and I was worried.  Why worry?  Well, there were two major concerns.

First, the Prez had never traveled that long...alone with the dogs.  Secondly, the dogs had never traveled that long in any vehicle and let's face it, ten hours is a long time!!  I had told the Prez about the importance of them eating breakfast and stopping to let them relieve themselves.  You see, ever since they were pups, I've been the "one."   It was a new experience for all three of them.

Anyway, as I was shaking out the throw rugs, I saw a pick-up truck sitting in our driveway with two people in it.  Leaning around the corner of the garage, I said, "Can I help you with something, Sir?"  Lowering his window to hear me, he responded immediately.  "We talked to Corey about possibly building on one of the lots and wanted to take a tour of the house one of these days."  My response?  "Well, you're here now, right?  So shut off the engine and come on in."

That was the day I met Mary Ellen and Butch, as he prefers to be called.  They want to have Corey build their house on the lower lot located on the opposite side of the road.  They absolutely loved the house and the printed information I gave him regarding the geothermal heat/AC system.  They were the second couple to come visit and tour.  They were the second couple that will build here, Anne and Tom were the first.  I wonder if I have a future in the Real Estate Business?  Corey tells me I'm his best salesperson!  LOL!!!

When I heard the truck pull in the driveway, I was elated.  By the time I got to the truck, the dogs were already in the fenced in area and talking to me from behind the fence.  After hugging the Prez and planting a smooch on his pinchy face, I couldn't wait to go and play with the kids and he knew it.  That's just what I did...sat right on the ground getting dog kisses from Moon as Copper plopped his fanny right in my lap to get a one-handed body massage!  It was heavenly.  We were together again!


We walked the perimeter of the fence line and they took in all the sniffs they could before it was time give them their supper.  They were here at last...home.  Now we just had to get familiar with the surrounding sights and sounds.  The first few nights were rough, I'll admit.  They stayed outside and barked and barked at nearly every new sight and sound.  However, by the end of the week, they were golden!  They liked it as much as we did. 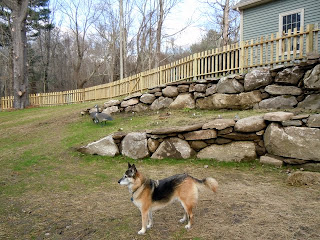 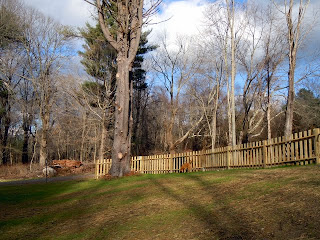 Anonymous said…
Oh my goodness, ten days, that must have seemed an eternity to both you and the dogs.
December 4, 2011 at 8:25 AM

TexWisGirl said…
i know how relieved you were to have your babies home with you!!! and looks like they have a great yard to explore!
December 4, 2011 at 10:09 AM

carol l mckenna said…
It all looks very homey and wonderful! Glad to hear you are starting sketch again ~ That is wonderful! ~ happy for you all ~ namaste, Carol ^_^
December 4, 2011 at 8:18 PM

Wsprsweetly Of Cottages said…
There's more to this story..I know it! People are building homes on your property? Naw..there is more to this..and I need to get up to speed is all
Moose poop??? LOL Fell on the floor with that one! :)
Yep..I'm going to like getting to know you!!
December 5, 2011 at 1:39 AM

MadSnapper said…
your fence is so beautiful and you already know how i feel about the gorgeous pups in the photos. I like the fence and the rocks.
December 5, 2011 at 4:04 PM