Timber…..aka Listen to Your Dog

Last week that heavy rain storm that hovered over the South for a few days found it’s way to Connecticut.  During the day, we had intermittent sprinkles.  No big deal.  However, that night it got down right nasty!

Awakened by the howling winds and torrential rain, I climbed out of the covers and peeked at the clock.  It was 1:30 in the morning and I couldn’t wait to climb back into bed and get back under the covers.  Falling back to sleep listening to the wind howl was more relaxing than I realized.  Then I was awakened by barking.  It was Copper.  It sounded as if he was right outside his condo.

In the pitch dark I couldn’t see anything let alone decipher what he was barking at.  I decided to wait until daylight before I went out to investigate because he’d stopped and returned to his house.  Pulling on my nylon pants over my jammies and zippering my jacket, I shuddered to think how it would feel to be out in this storm.  Off I went.  Through the garage, filling the red bucket with their breakfast, I grabbed an extra treat for each of them.  To tell you the truth, I’d forgotten about the barking until I raised the garage door.

Holy moose poops!  There it was.  Our forty foot cedar tree was leaning on a cluster of dead trees.  Its roots had been ripped from the earth swollen with rain.  Crap!  Now the Prez would have to contend with another “widow maker.”  The Prez knows how to work with trees and chain saws.  He's been doing that for forty years, growing up on a farm and living in the country.

After feeding the dogs, I immediately went in.  No playing until the rain slowed.  Waiting until the Prez got up, I broke the news to him and never finished explaining when he was in the garage ready to push the button for the door.  “At least it didn’t hit your truck,”  I said. 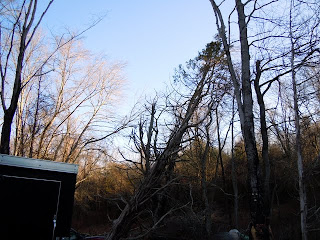 The day after the storm, the sunny was bright as could be.  Have you ever noticed how clean and clear the sky looks after a bad storm? 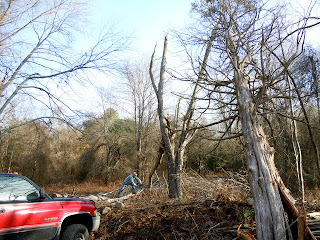 As the Prez artfully attacked the cluster of dead trees, the cedar remained steady.  However, I noticed that the trunk appeared significantly different that it did when it was discovered.  Not to worry, the tree is down now resting comfortably.

MadSnapper said…
dogs are so wonderful. good boy. I can read our dogs even when they dont bark. if one raises their head and cocks it to listen, i know something is about to happen. if baby goes in her condo (our walk in closet) we know rain is imminent or thunder. glad it did not damage and that you have a hubby who can "handle it". i just tried to add you to my reader. it will not take. i will not give up.
December 14, 2011 at 9:24 AM

Gail said…
Glad nothing was damaged other than trees. That will make some wonderful wood for projects.