You may have seen Moon's stuffed toy in pictures here and there.  Well, that's Fluffy.  She's had it since her first Christmas.  It's a stuffed bone with one of those squeakers in it.  I know.  I know.  We are not supposed to give our dogs that kind of toy.  Moon has always been fine with it.  Since I am not a cardiologist, I never wanted to perform surgery to remove Fluffy's heart (the squeaker).  And so it stayed.

Several months ago, long before moving, I came across Fluffy while packing.  Noticing it had several small holes, I was tempted to simply toss it.  I chose otherwise, placing it in my sewing basket as I packed.  Well, now that I can sit for short periods, I dug out my sewing basket to try to play catch up and there it was right on top. 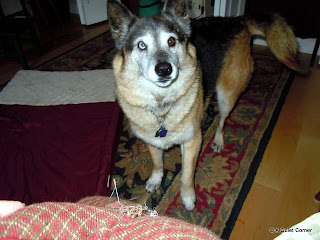 Moon watched intently as I stitched and re-stitched.  It was as if she knew Fluffy was in good hands even though many surgeries had been performed on Fluffy in the past. 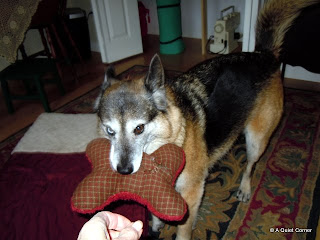 When I was done, she gently took him out of my hand and placed him right on her bed.  Moon was happy as I watched her placed her head on top of him.  As with so many other things, they only need our time.
Email Post
Labels: Dogs Moon

Ann said…
Being the irresponsible person I am I've given Duke plenty of toys with squeakers in them. He being the smart dog that he is always removes them first thing. Duke thinks that having something inside a toy is senseless.
Moon must be much kinder to her toys than Duke is :)
January 29, 2012 at 5:55 AM

MadSnapper said…
great story, touched me to the bottom of my heart. we had a dog named Max, his joy in life was to remove the squeaker from new toys. he still played with them, but minus the squeaker. Cooper was a dog who had to have a squeaker to be happy, he would wander the house going squeaky squeaky.
January 29, 2012 at 8:35 AM

~Kim at Golden Pines~ said…
We've performed that same kind of surgery on many patients in our household and just like the face in your post, you can tell that it's always appreciated! :-)
January 29, 2012 at 6:42 PM

Chatty Crone said…
Well I too have performed surgery - nice to know a fellow surgeon! sandie
January 29, 2012 at 9:18 PM

Mary said…
Sioux is our squeaky toy dog -- she loves to gently massage her toys with her mouth and hear the noise.