It Is What It Is

I couldn't help but watch each and every step it took as it made it's way up the driveway.  It was big, beautiful, muscular and black.  It headed around the garage so I lost sight of it for a few moments.  Knowing where it would come out once it passed the garage, I immediately thought, Oh, I can't wait to see this!

Moon spotted it first and immediately let out a single bark...you know, that bark, in that tone, calling for reinforcements...calling for Copper.  Then before I knew it, it was up the tree, sitting comfortably, perched on what appeared to be mere twigs waiting and watching the two clever (yeah, right?) canines as they continued to circle the tree again and again.  Uh duh?? Which way did it go?

After telling the Prez what was going on, he decided to take the two "trackers" for a walk down the gravel road so it could and would climb down safely. 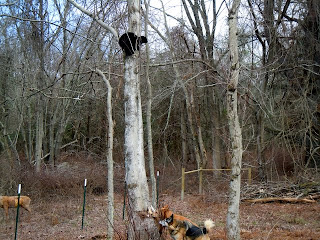 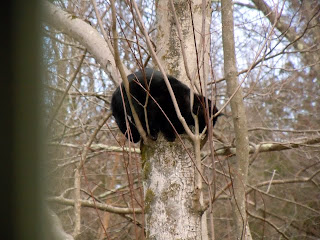 See how it's just sort of "balanced" on that small limb near it's hind legs.  Oh, it hemmed and hawed for quite a while after the Prez left the yard with the dogs.  I was actually wondering if it was thinking, Yikes this is higher than I thought!

Growing tired of holding the camera  as I stayed glued to the window, I placed my finger on the shutter button as it finally made a move.  When it began it's descent, it almost looked as if it was sliding down because it came front paws first!  I always thought cats came down trees backwards, but hey, it is what it is! 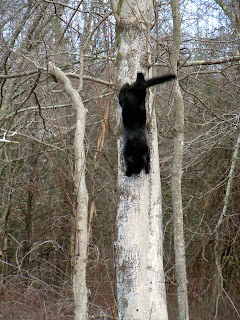 Then it made it's way slowly through the brush slinking along to the fence line then walking paralell to it for a while before escaping through the opening and disappearing into the thick woods behind us. 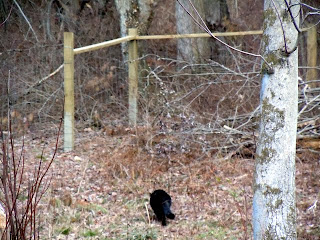 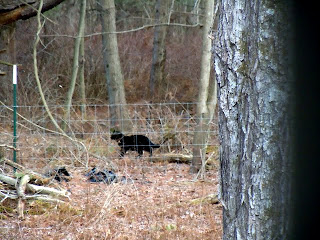 Meanwhile, when my two diligent canines returned, all they got was all the leftover "sniffs" all around Nature's Foxy Tree.  Funny, but for days after it was here, the kids continued to pick up it's trail alway repeating their same maneuvers...around the tree, sniff the trunk, then along the ground to the fence.  Whoever it belongs to, it is well cared for.   Perhaps, it is a recarnation of my Vern.
﻿
Email Post
Labels: Cats Connecticut Copper Dogs Moon

Retired Knitter said…
Most definitely a cat! I have lived with them for 42years and knew immediately what it was. However, you are right. I thought they went down backwards as well - that is how their nails are designed. That was one beautiful animal. I surely hope it has a good home.
January 2, 2012 at 8:06 AM

Gail said…
There is always much excitement here when new smells arrive.

Looked like a bear at first...or maybe that's where your words took me.

Sonya @ Under the Desert Sky said…
Livie guessed it was a leopard, then realized what it was by the time we looked at the last photo.
January 2, 2012 at 10:44 AM

carol l mckenna said…
Wow! What was it? Great photos ~ thanks for linking up to Miracle Monday at Share the Creative Journey ~ would you mind copying my 'button' and including it in your post and side bar ~ thanks, namaste, Carol ^_^
January 2, 2012 at 11:02 AM

Angela said…
You had me there JP! I thought it was a baby bear at first! lol Then I seen the tail and knew it wasn't a baby bear but a cat. That was one big black cat! Glad it didn't come to my house!
January 2, 2012 at 6:32 PM

~Kim at Golden Pines~ said…
I thought it was a bear at first too--But it was just as much fun as a bear, and you can keep it, right?!