Bringing the new bed into my office and placing it strategically on the carpet, I thought it would be perfect for Moon.  I mean it looked great to me!  The three inch thick rectangular orthopedic foam snugly zippered in it's rich burgundy cover appeared cozy enough especially since one end was covered in plush pile where Moon would lay her head.  The underside of the bed was skid resistant.  How could it not be...well perfect for her...the dog that was so easily pleased?

Meanwhile, it was time for the introduction.  Surprisingly Copper went without hesitation immediately to his new bed which was identical to Moon's except a rich chocolate brown.  I had placed his down the hall from hers so they'd have their own space.  Watching him sprawl out and place his head on the built in pile pillow, I said, "Good boy."

Moon wandered into the office, sniffed the bed and then placed one paw on it.  It seemed to agree with her so, the other legs immediately followed.  Curling up and placing her head on the soft pile, she seemed content.  That's my girl, I thought...so easy to please.

Meanwhile, dialing my sister's number, I sat in my chair lowering myself slowly to avoid pain.  Getting comfortable I knew I would be on the phone for a while with her as we always have a lot to say to each other.  Watching Moon rest on her new bed, a long awaited calmness came over me as well.  It was one of those times filled with total relaxation...at least for a while.

Moon  had now rolled onto her back, her favorite sleeping position.  Slowly inching a little further and further, she extended her legs in the air (probably to get good air circulation on her belly).  I thought about getting up to get the camera which was upstairs but knew if I moved, I'd disturb the sleeping beauty.

What happened next happened so fast and was so funny, I couldn't help but laugh out loud right into my sister's ear.  Moon had relaxed and rolled so much that she rolled right off the bed!  Startled by the three inch drop, she scrambled to get up on all fours and starred at the bed in amazement.  It was as if she thought that the damn bed pushed her off!!!  After starring intently at the bed, she then gently picked up Fluffy and placed it on her new bed.  She chose to stretch out nearby...on the carpet instead!!! 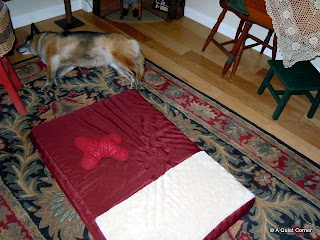 Sandra said…
i hope this has not caused "fear of bed syndrome" and that she will overcome and use her beautiful bed. i laughed out loud to just reading about it.
January 30, 2012 at 8:20 AM

gld said…
I can't tell you how any times I fixed a nice bed for the cat (when we just had l or 2). They ignored it completely. Cows are even
worse. You just can't help them!

Sorry you are still having so much pain. I can identify with that. I spent most of Sunday in my easy chair (with my Kindle) which made it a little better.
January 30, 2012 at 10:26 AM

Bee Lady said…
So funny! I laughed when I read it. But it also gave me the idea that when I make my dogs beds, to not put foam in them. I plan on making some beds when we move, right now they sleep in their cages or on the furniture (I know I know-but it'll be easier to break them when we move). You wouldn't believe how many times I've rescued them from falling off the furniture!

Jane said…
I am still laughing,I can just see this little upset,so funny.Hope your pain goes away soon. Blessings Jane
January 30, 2012 at 4:46 PM

Tracy said…
I just happened upon your blog and it's very nice...love your header photo of the glass with the snowflakes. Poor Moon...perhaps he needs a bigger bed?
January 30, 2012 at 6:47 PM

Angela said…
That is so hilarious JP! Gotta love it that Moon is taking care that her favorite toy has a nice cushy new bed! lol Or is she hoping it will toss her toy off like it did her?! lol
January 30, 2012 at 10:15 PM

Nancy said…
So nice of you to buy a new bed for the dog toy. La-di-da!

Nancy @ A Rural Journal (couldn't leave a comment without signing in -- dang embedded comments are getting tricky again! :)
January 31, 2012 at 1:19 PM