Several years ago, while visiting my best friend here in Connecticut, I was given "the rock." Laughing as she told me that it had powers...some sort of tale about bringing you money.  Oh, I know what you're thinking because I thought the same thing, humored her and placed it in my pocket.  Placing it in my suitcase and returning to Virginia, I unpacked my bag.  When I came across it, I thought about where I should keep the token from her.    I placed it on the shelf of my PC cabinet along with other memorabilia she has bestowed upn me over the years.  And yes, occasionally, I would pick it up and sort of roll it around in my hands thinking of how she laughed when she handed it to me, before setting it right back in it's spot on the shelf. 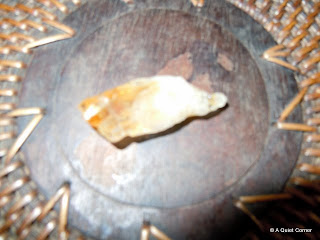 Well it's been years now and I have to tell you...I think it works!  Laugh if you will but here are just a few examples of my good fortune.  It seems that when I rubbed it, money would come.  One of the first things I received was a check in the mail for an insurance rebate...one of those good driver awards.  Then another time, I received a check from Nabisco because I'd complained about one of their products.  Yet another time, I found a twenty dollar bill in an old wallet.  The list went on.

Now mind you, I never picked up the rock and blatantly wished for money.  I simply picked up the rock and rubbed it with my hands before placing it back where it belonged on that shelf.  Of course, I had to pack it when we left Virginia.  I mean, after all, it was a gift.  I brought it with me when we moved, not becasue of it's "powers" but becasue my best friend gave it to me.  However, the PC cabinet remained behind and, in fact, was given to one of our neighbors.

Before the Prez left for Virginia, I'd once again picked up the rock, rolled it around in my palm and this time I placed it in it's new spot on the antique child's desk in my office.  Well, the night the Prez packed his bag, our logger called.  He had several checks waiting.

Oh, one more thing.  I've decided to go into business and it's going to be called:

Dar said…
Share and share alike has a good ring to it~~~what a thoughtful friend and yes, I'll still be your friend.
No skepticism here.
BlessYourHeart
January 4, 2012 at 8:08 AM

Beverly@Beverly's Back Porch said…
I was your friend before the rock. Now I want to be a really, really good friend. haha
January 4, 2012 at 1:19 PM

Angela said…
Wow! Now that is a rock worth keeping! When we bought our property we had planned on logging a few years down the road. Then our neighbor caught our woods on fire and it burned for a week. I can't even get a logger to look at my trees now.
January 4, 2012 at 6:37 PM

MadSnapper said…
I say start deciding what to spend your fortune on from renting those rocks out.
January 7, 2012 at 10:11 AM

laurak/ForestWalkArt :) said…
i carry two rocks...stones in my pocket ALL the time. sam carries a citrine rock. i have stones & rocks strategically placed all over the house...
the forces of the earth....the energy...at work...
January 14, 2012 at 8:19 AM