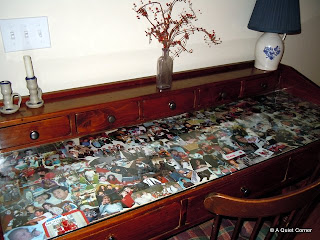 It was created out of love, with love so she could see  those she loved.  It was created by a woman who way back when shoveled snow left from a storm that blanketed the northeast.

Her husband, who knew the value of a dollar, was at work pulling his "three days on" and she had to get to work herself.  So she shoveled.

That night another snowstorm hit and, once again, she heaved the white powder off to the sides clearing tracks out to the road which would enable her to get to work. Sprinkling salt on the tire treads that evening hoping that it would help the residue dissipate, she ate her supper while watching the local news.  Another snowstorm was predicted that night.

Dreading what she would find in the morning, she arose and bundled up before heading out.  She had grown weary on this third day and felt that the long hot shower would relieve her aches and pains.  Reaching up to wash her hair with both hands, she felt a pop.  No longer being able to stand, she crawled on her hands and knees to the bed and climbed in.  Her husband would be home from pulling his "three days on" soon.

When he came into the bedroom and questioned what was wrong, she told him she couldn't stand up straight.  Several doctors, xrays and hours of pain later, the MRI should a herniated disc.  She would be home a while.  It was during this time that the antique desk was transformed into a forever keepsake...displaying those she loved.
Email Post
Labels: Family Health-Wellness

MorningAJ said…
It might ebcourage me to keep my desk tidy if I did that. You can never see the surface of my work areas!
February 2, 2012 at 6:20 AM

Empty Nester said…
I did this to one of our tables years ago with pictures of our 4 daughters! I'm thinking of doing it to my desk now that I've seen this! Just stopping by to follow you from the A-Z challenge! Last year was so much fun, I decided to give a go again!
February 2, 2012 at 11:04 AM

Chatty Crone said…
What a great idea - was this you? I took all my Christmas cards and make a collage out of them and I have been wondering where to put them. Here is God's answer.

MadSnapper said…
i am thinking this must be you. great idea, beautiful desk and a great story
February 2, 2012 at 4:33 PM

Ann said…
that shoveling can be dreadful. So was this story about you? I'm betting yes.
That is a great idea though, like someone else said it would encourage me to keep the desk cleaned off
February 2, 2012 at 6:47 PM