The loud crashing noise echoed throughout the whole house. On the couch watching NCIS and playing Angry Birds, I said, "Honey?"  No answer.  Not a sound. NOTHING....no response....total silence, which to tell you the truth, seemed just as loud as the ominous as the crashing. Once again, "Honey" followed by "are you alright?"

Seeming to take forever, the response was slow and deliberate but it was the Prez' voice. "What?"

Then I heard the all too familiar sound of tools.  As the bit of the drill tore into what sounded like a wall, I decided that I'd better go see exactly what the Prez was doing. 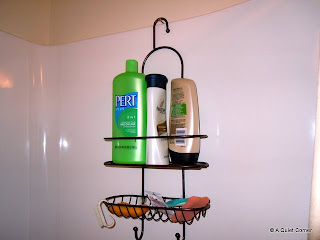 He'd drilled a hole directly above the shower, inserted a molly, then the screw...the screw on which to hang the shower caddy.  I was wondering how long it would take him to do that.  Since we moving here in October, the damn thing has come unstuck at least ten times using the suction cups it came with!

Lisa @ Two Bears Farm said…
Ours is hung up that way too!

Denise at Autumn Sky said…
Very nice indeed! I find those kind of suction cups never work on a slippery surface so I'm not sure why they are designed like that in the first place.
February 11, 2012 at 7:35 AM

Empty Nester said…
I've got a handy man too. But getting him to do something OR complete a project is nearly impossible! Drives me nuts. Especially when he is so dang good at doing so many things. Those suction cups NEVER work, do they?
February 11, 2012 at 11:11 AM

Angela said…
That's why I've never bought one because I knew it wouldn't hold with the suction cups. After seeing what your hand man the Prez did gave me an idea! I'd like a shelf at the top of the tub on the other side of where the shower is! Now that would be great and hold lots of different things. We use different shampoos and even different soap. I used to have a problem with a boy who would empty entire bottles when he was younger and that would had been great to have back then! lol
February 11, 2012 at 6:27 PM

Ann said…
I should show this to my husband since our shower caddy is always coming off those darn suction cups.
February 11, 2012 at 7:21 PM

Unknown said…
I spent nearly a year yanking suction cups off walls and windows and tossing them in the trash can after we moved up here.....the trash can in my shop where they got buried under all kinds of junk so the girls wouldn't dig 'em out and put 'em back up. They finally gave up and learned to live with properly installed hooks for hangers. I've been less successful weaning them from duck tape.
February 17, 2012 at 12:42 AM