It's In the Stars

Feeling the onset of Spring, we headed outdoors to do just a few things around the yard.  On the "Things To Do" list was to hang the stars, which we put off until it warmed up and we could use the hangers made for vinyl siding.

Immediately the Prez was climbing the ladder and about ready to affix the first hook, when I said, "How many do we have?"

"I have no idea" was the reply.

"I think we should first see what we have before we begin hanging hardware, don't you?"

And that's just what we did...walked down to the trailer where stuff is stored temporarily until we build a second garage (which will house the Prez' big old Dodge and other large items like the ATV, the commercial mower, etc.).  But that's not happening until "down the road" when we can devote the time and money to such an undertaking.  Anyway opening the trailer was like walking into a virtual treasure chest!  I got excited when I saw my weed eater!!!!

Gathering up the stars, we counted nine.  Watching him strategically place the rusty stars which range in size from 3 1/2 feet in diameter to a mere 12 inches I'd toss the stick for Copper now and then.  The only thing I was really able to do was carry the stars and hardware as I do NOT "do" ladders higher than 6 feet.

Holy moosepoops!!  It took us two hours just to hang stars!  Just imagine how long it took to put all those that appear in the sky! 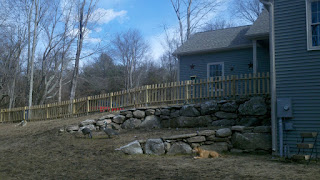 Moon and Copper watched.
Oh, one more thing, when I got on the floor that night to do some stretches/exercises for my back, I felt a "pop."  I think...I hope..the disc moved back to where it belonged!  I guess it was simply...
all in the stars.

Anonymous said…
Probably standing looking up as the stars were installed got things moving.
February 25, 2012 at 7:36 AM

Chatty Crone said…
My questions is with a bad back (and hopefully it was a good op) were you doing so much work!?

You're right though - stars are wonderful!

Unknown said…
Beautiful! How inspirational. I love that the pups oversaw the project! That's exactly what our two puppies do too. Alas, I don't "do" the ladder thing either. Good thing we have brave ladder climbers to reach the stars for us. :)

Unknown said…
Hope that was a good pop. Each time my back pops I start wondering if I stripped a screw or threw a rod. At least now I get to carry a card that gets me through metal detectors without being treated like a terrorist.
February 25, 2012 at 12:03 PM

Ann said…
hanging stars sounds like heavenly work :)
Hope that was a good pop you heard. Wish I could make myself get down and do some of the exercises I should be doing
February 25, 2012 at 5:52 PM