A New Direction aka Taking Flight

The state of Rhode Island has always held a special place in my heart.  Way back in 1802, when I was raising my son and daughter on my own and summer came, we would occasionally drive to the beach in Rhode Island.  The waves were AWESOME...much bigger...there even though the drive was a little longer than the drive to the beaches here in Connecticut.

Well, Rhode Island has taken on a whole new meaning for me.  Spending the entire day there this past Tuesday was absolutely awesome!  My daughter picked me up in the morning and we were both curious about how long it would be from my house.  It only took one hour and twenty minutes which is what it takes me now to get to her place.

Then before going to lunch and since we had some time before meeting the next realtor, we took a ride.  About 1/2 mile away from one of the houses she looked at we discovered a lovely serene park right on the Atlantic. 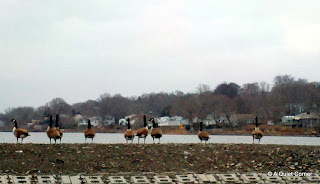 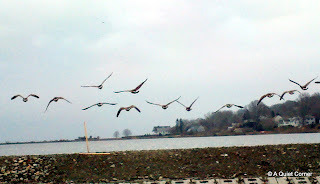 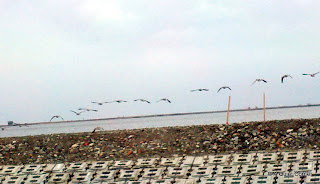 Next week, they are returning to Rhode Island to hopefully finalize their decision as to which place they will live.  Then, March and April will be packing.  The Pres and I are planning on them using our trailer that we bought to get us here.

You're probably wondering about me being saddened by this decision.  I am not.  I am sooooo excited for her and her honey as a whole new world awaits them as they, like the geese in the photos, take flight!  Besides, all the places we looked at have at least two bedrooms...one for Mom!!!

MadSnapper said…
and the good news is, they will be the same distance to travel to visit as they are now. you have 3 photos that are perfect for All In A Row meme.
March 18, 2012 at 8:01 AM

Ann said…
Love the shots from that park. How exciting for your daughter. The distance and the extra bedroom are definitely pluses for you
March 18, 2012 at 9:36 AM

Ashling said…
What a great attitude to have! I'm still saddened by my son's recent move to a new job three hours away, so admire your happiness for them. And how cool you can visit them and the ocean!
March 19, 2012 at 6:32 AM

Beatrice P. Boyd said…
JP, soon we will both have family in RI as our grandkids and their parents live in Cranston. We're visiting at Easter and will also be in New London, CT on Easter. Please tell me again where in CT you are now living cause I was wondering just how far you are for where we will be.
March 24, 2012 at 7:00 AM