The Plate - A Story

Back in 1802, when I was married to husband #2, I lived in Southbury, a rural community in the vicinity of where I grew up.  My daughter was a teenager and my son was twelve.  Neither of them like husband #2.  Not too many people did but I was too blind to see what others saw.  Our marriage was short lived (a total of two years to the date) so that in itself tells you the story.

However, the house that we lived in had a pond on the property where my son would go and fish for bass.  One day when he walked back up to the house, he handed me a plate that he'd found on the trail in the woods.  Cleaning the soil off of it, I realized it was pewter.  I decided then and there I would keep it forever...not because it was pewter, but because my son gave it to me. 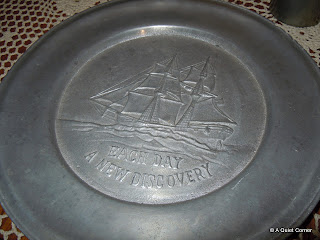 "Each Day
A New Discovery"

Oh, one more thing I learned from an eleven year old....it's true!  It was he who made a simple yet profound statement to me (while I was married to husband #2) one evening while watching TV in the family room.  He said, "Mom, you're not the same person you used to be.  He's changed you.  You're not even any fun any more."

At the time, that broke my heart.
But it made me see or at least begin to see what had happened to me.

MorningAJ said…
Out of the mouths of babes....

I didn't listen when people warned me about husband number 1. I guess you just have to learn for yourself.

Old Time Cindy said…
Our children can be so wise. Good thing we allow ourselves to learn from them.
March 6, 2012 at 6:32 AM

Lisa @ Two Bears Farm said…
I recall so well when my mom tried to warn me off a certain boyfriend. I didn't listen at the time. But she was so right.

Bee Lady said…
When I was going through a divorce from my first husband my Mom said, "I told your Dad the other day we're getting our old Cindy back." I love your plate. No matter if it was pewter or plastic I'd love it, I love what it says.

Ann said…
after I was divorced from my first husband everyone used to comment on how much happier and friendlier I was. Makes me wonder sometimes why I gave that up....lol
March 6, 2012 at 5:56 PM

Beatrice P. Boyd said…
A timely post and one which many of us can apparently identify, JP. And I have noticed too that the previous comments were all from women. My ex also caused personality changed that I didn't "see" until he wasn't around anymore. Your son's comment was very profound for one so young. We do indeed live and learn. My 1st marriage went for a bit longer than yours - 7 years - and now #2 is going on 13 much happier years.
March 6, 2012 at 6:55 PM