Monday this week was brisk with temps predicted to only be in the fifties.  It would be a perfect day for us to drive out to my MIL's and give her a hand cleaning up the yard.  Leaving shortly after eight, we got to Mom's without running into any traffic.  However, the hour and fifteen minute drive would mean that once we got into her house we'd both have business to take care of.  Nope!  Looking at each other sorrowfully, we were told we'd have to "hold it" because she's lost power about a half hour earlier. 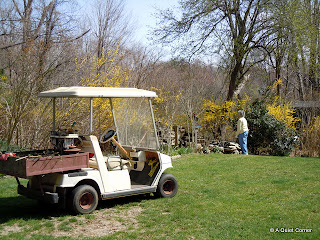 The Pres found a nice tree outside while I was stuck "holding it."  However, as soon as I got my mind focused on the tasks at hand, my urge subsided.  As I began to cut brush with the lopers, the Pres joined in immediately as Mom looked on from the garden's outer edge.

Then my oldest step daughter joined us donning the Pres' leather gloves.  Before we knew it, one of long time friends stopped by, assuring the Pres that he would return before lunch to make "one quick pass." 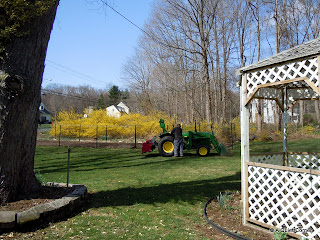 He did just that.  We just had enough time to stop working in the brush and pull~up, fold and remove the weed~mat from the rectangular garden ( 20" x 80") when we heard him coming up and over the curb with his tractor, tiller attached. 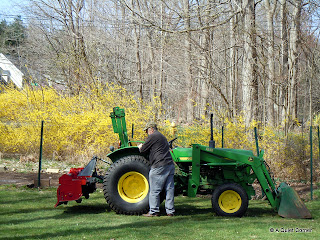 We worked until two o'clock and only took a lunch break (aside from the bathroom break I took once the power came back on!).  We got the entire area behind her huge bed cleaned out.  The thorny bushes were ripped out, the Forsythia given full exposure to the sun and all the Rose of Sharon trees straightened.  The bed was weeded and cleaned, exposing it's aged perennials to the rays of the sun.

On the ride home we talked about how sore we were.  Yet we knew it was the right thing to do.  Mom was happy...and that's what really mattered.
~~~
Linking to:

Cathy Olliffe-Webster said…
Your photos are beautiful - that forsythia bush is just glowing!
But did you ever get to pee or are you still holding it????
March 29, 2012 at 6:41 AM

Sandra said…
a good deed done with a little fun thrown in. for me there is no holding, so it would have been behind a bush somewhere.
March 29, 2012 at 8:01 AM

Matthew MacNish said…
Hi A Quiet Corner. Just dropping in to follow as your A to Z co-host. Nice to meet you!

Quick tip - consider moving your follower widget to the top of your sidebar. This will make it easier for new visitors to follow.
March 29, 2012 at 11:37 AM

gld said…
I bet she is so happy you all have moved back home! I am happy for her.