When you have a house as small as ours (a mere 1750 sq ft) and company arrives, it doesn't take much to make a houseful!  Last Sunday the first to arrive was my daughter and her honey.  Personally I'm glad that they came early because I had the time to get her opinion on some more recent decorating ideas.  So while I was preparing what was to be "lunch," we got to chat a little and laugh a little which was nice...really nice! 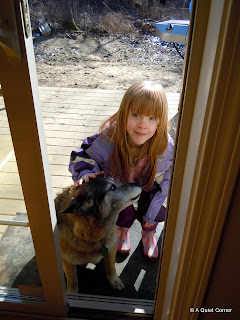 Then the next to arrive was my youngest step daughter and her three little girls (ages eleven, six and five).  They, of course, wanted to immediately go outside and play with Moon and Copper.  When the three girls come to visit, they inevitably get into an argument over the dogs.  The reason?  Because there are only TWO dogs and there are THREE little girls that all want a turn walking their own dog!  I cannot tell you how many times I've had to go outside, take a dog away from whoever it is that's being a tad greedy that day and handing it over to the the one who's wearing the frown.  Then, the frown goes on the face that has no dog.  The youngest little one (who is a terror by nature...an instigator) prefers Moon, much more sedate in her manner while the older two prefer Copper and his high energy and obedient manner (especially when he wants to play!).  No, we do NOT want another dog...two is plenty.  All I'm saying is that I get pooped from all the drama.  I'm not good at drama. 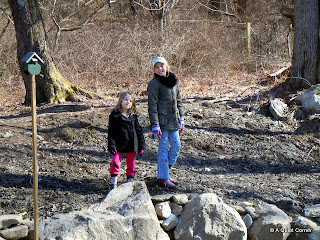 Within a half hour or so the eldest stepdaughter arrived with only one of her sons, the youngest, who just turned fourteen.  So, here we were only ten of us and although we were not tripping over each other, every direction you turned there was another conversation!  Since I was helping the kids fix their plates and getting them napkins, drinks their mothers had settled down into conversations with their Dad (the Prez).

All in all, the day went fine.  Before I knew it, it was 6:45pm and they were heading for the door.  Hugs, kisses, more hugs, more kisses but I must admit I was glad.  I hope that doesn't sound rude, but I was pooped!  And the next day...well, I thought Copper was dead too!  He got up to go outside, ate a little of his breakfast, came in and slept all day long.  I mean he was
exhausted...absolutely exhausted!!

I KNOW they are glad to have us back...
even though we only have two dogs!

Anonymous said…
glad to see them come and glad to see them go....I am tickled at your descripition of a small house though. I would love the extra 700 square feet you have.
March 4, 2012 at 7:55 AM

Ann said…
I know exactly how you feel. Of course I don't have any grandchildren but I feel the same way when everyone stops over. It's great to see them but it's so nice when they leave and the house is quiet again
March 4, 2012 at 6:17 PM

Chatty Crone said…
Okay these will be the days you'll remember and I know how to solve one of the problems - get another dog! sandie
March 4, 2012 at 8:13 PM