Arriving early intentionally to prepare myself, I pulled in to park and several things caught my attention immediately.  Two men dressed in outdoor gear were rummaging through the boxes on a small table beneath a tent.  Although there were only four cars parked in the lot, I puled in the Mini , rolled the window down and said, " Are you folks with the Discovery Tour?"  Looking up and smiling they said, "Yes, we are."

The next thing I noticed as I shut off the engine and reached to the passenger seat to gather my hat and gear was the size of the pond!  It was sooooooo tiny...no bigger than my driveway!

Crap!  And I'm going to be given instructions, placed in a PFD and then in this thing that I've never driven...never ridden in and know nothing about?!  I thought.

Yep, at the age of 64, I was gong to learn how to kayak!  I was about to participate in one of the Discovery Tours, sponsored by LLBean and was just so excited,I couldn't stop grinning... 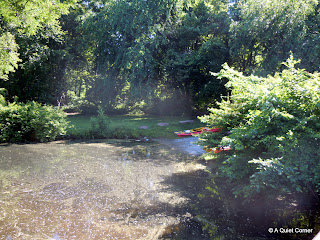 even though the water had a lot of scum floating on top of it!  But then, as I began to wander around the park, I felt comforted when I read this: 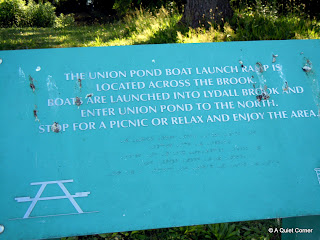 Returning to the instructors, our "class" was all present and accounted for.  There would be only four of us...all senior citizens, retired and ready for adventure...managed by the two guides which meant we'd receive a lot individual attention!!!

First, of course, we had to zip and buckle our PFD (personal floatation device).  Next we were given paddling instructions which covered everything from determining the proper length paddle to how to performing the strokes on dry land while in a standing position.  Then it was time to climb into our respective kayaks.  John and Chris (the instructors) decided to give the ten footers to Ellie and myself while Will and Paul would man the twelve footers.

Watching John adjust my foot pegs, the kayak began to rock side to side.  John then told me how to stop the rocking and I began to feel at ease.  Pushing my kayak into the shallow water, he instructed me to turn myself around to follow the others and that he would bring up the rear.  As I rounded the bend of the narrow scum filled inlet, there before me was open water, smooth as glass.  I loved it!  It gave the word peace a whole new meaning! 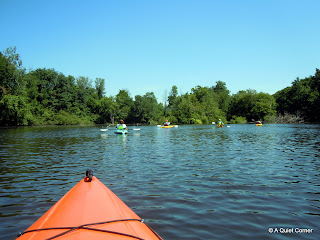 Oh, one more thing.
There's a lesson here:
Never bring a Chocolate Peanut Butter Protein Bar
with you when you kayak under the blazing sun.

valerietilsten59.blogspot.com said…
Ahh JP. we finally get to know what the mystery discovery trip is.
You write that at 64..thats young. Its a time to enjoy it all and fill in all that we can. Keeping busy is the best medicine for staying youthfull and healthy.
It all looks very interesting and I am sure that you really enjoyed it. See. a 64 year old can do more than a 20 yr old sometimes. Jolly good
Happy Sunday
val.
June 9, 2012 at 6:14 AM

Ann said…
How exciting. It sounds like so much fun but at the same time it's something I wouldn't do since I don't know how to swim and even with a PFD I just wouldn't feel comfortable. Too bad about the protein bar....lol
June 9, 2012 at 7:25 AM

Beatrice P. Boyd said…
WOW, JP, I was right! Glad you ahd a good time on your first outing. At one time we owned 2 kayaks, a single and tandem but when Grenville's shoulder started giving him so much trouble we sold the tandem and this year will sell the single. We had a lot of fun in NJ with them.
June 9, 2012 at 4:35 PM