Leaving my house promptly at 8:30 Thursday morning, I knew I had plenty of time to get to Hampton.  HOWEVER, I couldn't find the darn road...the left hand turn for Potter Rd!  Finally I decided to pull over and turn on the GPS on the phone.  I was on the wrong side of Mansfield Hollow!  Crap...glancing at the clock on my dash, I saw that it was now ten of nine.  They would be leaving right at nine.  At first, I thought don't speed, they'll be other walks but something told me otherwise and I decided it was time to put the Mini to the test as I raced along country roads hugging corners nicely.  Pulling in front of the meeting house, I tooted the horn and they looked up as I pulled past and squeezed into a little spot between two SUVs.  Whew!  I made it!  Grabbing my camera, water bottle and shirt, I shut the door behind me and crossed the road where I was greeted with warm smiles.

Oh, the walk?  It was a three mile jaunt into Goodwin State Forest led by Juan (DEEP) and it was AWESOME!  I never learned so much in such a short time and I met several other "seniors" who kayak! 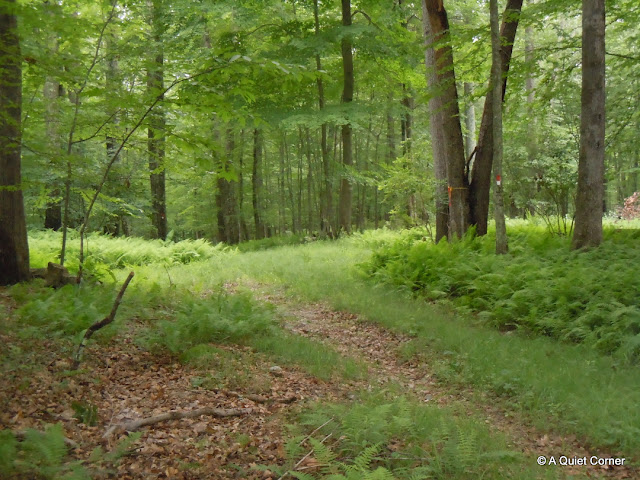 MadSnapper said…
when i saw the photo, before i read the post, i thought Wow her new house is heaven on earth. but at least you live close to heaven on earth. wish we had movies of you scooting around those turns.
June 19, 2012 at 9:59 AM

valerietilsten59.blogspot.com said…
You are really enjoying the outdoors and the adventures JP.. good fun. At least you made it.
happy days
val.
June 19, 2012 at 10:13 AM

Anonymous said…
Just looking at that photo I can feel the stillness surround me. Beautiful.
June 19, 2012 at 3:21 PM

Bee Lady said…
Phew! Glad you made it! Not bad driving for a "senior"!!!