A Helping Hand aka The Other Half

Saturday we lost power and since it was so early we decided we would hook up the trailer and deliver the TV cabinet and thirty bags of wood pellets to my son.

While we were there, the Prez helped him put down the weed killer and gave him some pointers on using hedge trimmers.  Meanwhile, my DIL, grand daughter and I headed over to the ball field to watch her step brother's game.

The power was on by the time we got home but about a half hour later the wind picked up....quickly and fiercely.  It was then we heard a series of noises.  Walking into the kitchen the Prez said..."Oh, a tree fell down."
Not to worry. 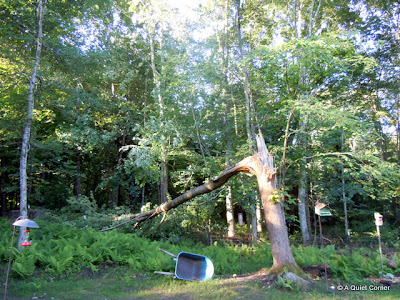 It fell onto the fence away from the house.  It was the other half of the tree that hit the house back in December, the night before my birthday! 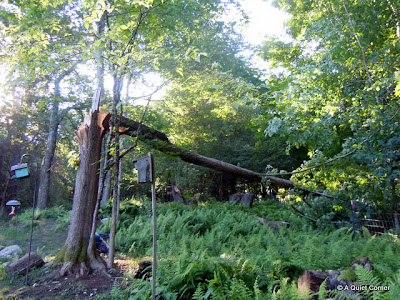 Inger said…
Good it fell in that direction. I thought it would be safer living in Connecticut than in the hollow! I guess I was wrong.
June 28, 2012 at 10:33 AM

TexWisGirl said…
yeah, definitely stay away from that chore! i believe that's when your pains started!
June 28, 2012 at 10:54 AM

Jeanne said…
oh, this happened at my house yesterday! Love the view out of the window on your header! Beautiful view of serenity!
July 2, 2012 at 6:31 PM