"Mom, can you and the Pres come by tomorrow and give me a hand putting the new "swing-set" together?"  The question was simple enough and the Pres agreed immediately.  He's all about "giving people (let alone one of the kids) a hand."  So, we decided to head over in the morning to spend a few hours with them on Sunday.  Now there are two keywords here:  swing-set and a few hours.  In our old eyes, we envisioned this:

However, what we saw upon arriving at 10:30 am were pieces piles of red cedar, stacked neatly by size,  strewned across the yard along with a table full of nuts, bolts, screws, washers...

and sheer enjoyment ahead of us! 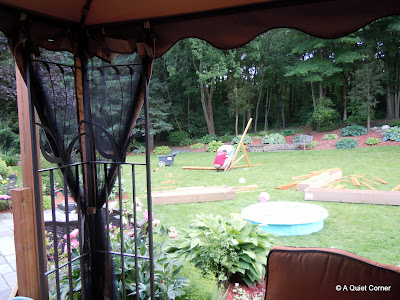 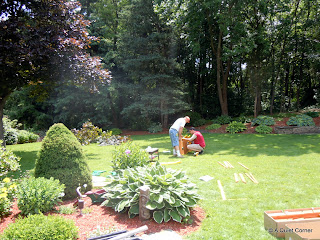 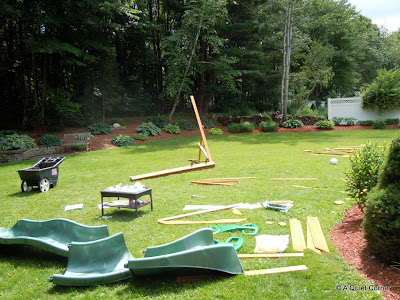 And so, as Mia put it, "Lets go play Nana so the boys can build!" 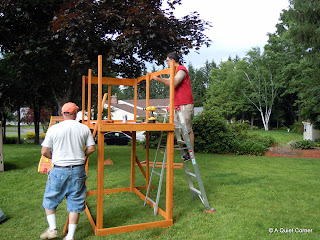 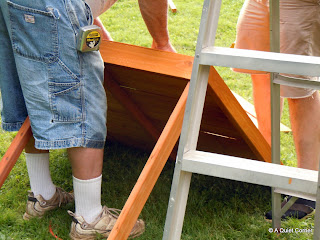 Playing outdoors in her little pool and taking her pretend dogs (Copper & Moon) for walks around the yard, we kept the boys company.  She really improvised rather nicely, I thought, using the swing chains for "leashes."  And so, I followed her all around the yard occasionally saying, "Moon, no."  She loved it!!

Morning passed quickly and before too long, it was time to go get the pizza her Mom ordered.   She fell asleep in the car seat and then her Mom just put her down for a nap.  Two hours later, she emerged refreshed, hands waving in the air, "Nana, I slept so long...lets play!"
Meanwhile, the boys were STILL at it.  It was close to three. 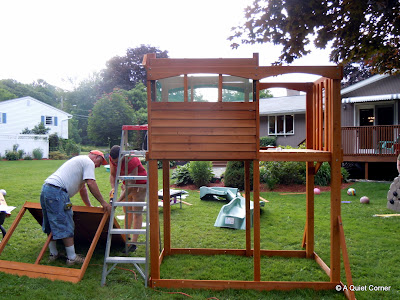 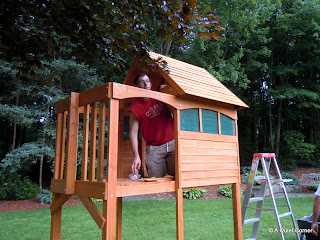 Note:  my son is 6'3" yet will be able to enjoy Mia's cooking in her soon to be swing-set! 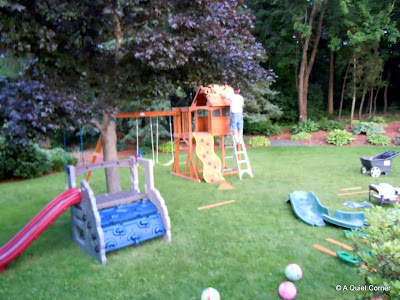 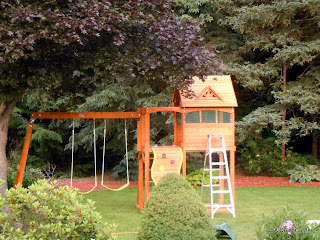 But by eight o'clock at night (with only a half hour lunch break), I was urging the Pres to head home because I was exhausted!

Mind you, the directions on the four cartons said it would take two people ten to twelve hours to erect...Stoney-Creek Lodge.

Oh,  one more thing.
When we left, it was not yet completed.
Next time we visit, I'll take a shot of the finished
"swing-set" because my son worked on it Monday after work to attach the slide, the sandbox seats, the planter and the tarps!

MadSnapper said…
i am a little worn out just watching them build it in photos. looks like a grand playhouse that will last for years. love the moon and copper pretend game
June 17, 2012 at 7:23 AM