Well, I guess I have to tell you.  You'll all figure it out sooner or later so I guess it's best that you here it from me rather than someone else, right?

The Pres is in Virginia.  He's been there a while now and the plan was for him to empty out the house, pack up the mower and a few other last remaining things that he's used when he went down there.
While he was down there, we also had made arrangements for the prospective buyers to stop by and get a first hand tour of the inner workings of the house...the geothermal heat/AC, the well, pump, the security system and all those important things.

As you know, life is NOT just all about stuff!  Knowing when he would be in Virginia, we wanted to also introduce them to a few of the neighbors...Buddy and his son, Jeff, along with my good friend, Lisa.  I had specifically asked the Pres to introduce the prospective owners to her since they too are young and love the outdoors...just like Lisa and Paul.

You see, when the closing is only a week away,
it was time to share...

our old friends...
and the place we once called home. 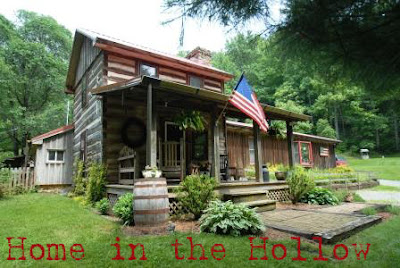 Angela said…
Congratulations on the sale of your house! I'm glad it is a young couple moving in so Lisa will have someone to hang with!
June 21, 2012 at 8:21 PM

Bee Lady said…
You scared me for a minute there! Your home in the hollow looks like a dream im sure the new owners will love it. I hope when we move the new owners love our house as much as we do.

Nancy C said…
How thoughtful are you? Love this!