Once upon a time there was a three year old who took dance lessons every Wednesday evening for many, many weeks.  As the big day drew near, the classes became much more demanding as they prepared for their recital.  In fact, the week before the recital, there were three rehearsals which is fine for the older students, but that was indeed a rigorous schedule for the three year olds!

Her parents grew concerned and somewhat worried...and rightfully so.  At one of them rehearsals, the little three year old simply sat down and watched all her fellow dancers twirl and perform the routine.  It was stressful for everyone.  In fact, her Mom told me that at the last rehearsal, some of the parents cried because the little dancers just stood there in amazement and fright in front of the audience (their parents).  However, the three year old's mother was very intuitive.  She took her aside and whispered in her ear, " If you can't remember the routine, just twirl."

Now, although the little three year old had some experience (she was one of the Three Little Pigs in her play at day~care), her parents did not know what to expect the day of her dance recital.  After all, they remembered all too well the incident at rehearsal when she simply sat down and watched the others perform, her big eyes following them closely.  Needless to say, they were feeling anxious awaiting their little girl's number. 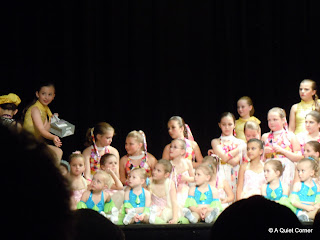 Unlike The Black Swan, this story has a happy and most beautiful ending.

Yesterday, the little three year old had her first dance recital and she was AWESOME!!!!  She performed a in two routines.  The first, a ballet, was to the tune Fly To Your Heart while the other, in tap, was to the ever popular tune...Row Row Row Your Boat.  If you didn't pick her out among the "crowd of pretties" in the photo above, I'll give you a hand. 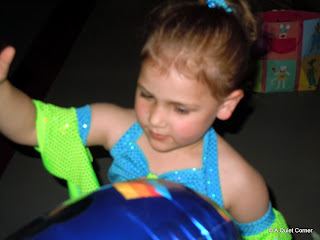 While her Nana was nervous too during the other performances, she had that special feeling inside.   When Group 2 walked out on stage to perform their ballet, Nana's eyes teared over.  They were tears of joy...tears of happiness...tears of pride...yes, tears for each one of those little beauties on stage in front of the huge audience. 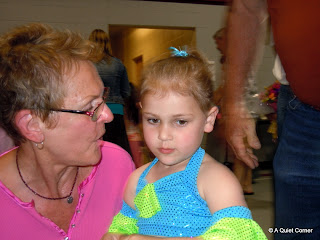 When the recital was over and families in the audience gathered around their respective dancer, the little three year old looked up at me and smiled.  Her eyes grew wide when I whispered in her ear, "Nana was so proud of you.  You were more beautiful than Belle (Beauty and the Beast, her favorite DVD)."  Then she said something totally profound.

And where was Grandpa Joe, you ask.  He had to go to the...you know...a nature call.

laurak/ForestWalkArt :) said…
figures, huh?
hopefully grandpa joe's nature call took him to the men's room...and not outside by a tree!
(i know...bad me...)