Thursday the 26th was his last day of classes.  The Pres had to take a Hunters Course here in Connecticut in order to get re-certified for his hunting license.  Initially he wasn't happy when he found that out,  however he knew it was his own for fault for letting it lapse while we lived in Virginia.

At least now he'll be able to hunt with both bow and rifle on his Uncle's property in Cheshire.  Apparently, the farm that leases the property from his Uncle is incurring a lot of crop damage. They call the Pres at least twice a week asking when he'll be eligible to hunt so it will be good for them and the Pres as he enjoys it so.

But...
speaking of crop damage...as I walked around our yard the other morning, I noticed that something has eaten my Thomas Jefferson Vine down to mere stubs!

At first I thought dear, get the deer! 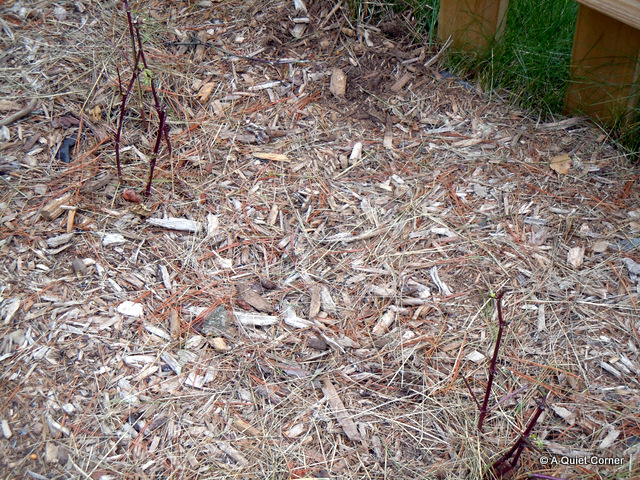 However in returning to the scene of the crime, I've decided it's those
rascally rabbits!!!

There's a ton of rabbit poop in the gravel driveway every day so I'm guessing that my Thomas Jefferson Vine was a good source of fiber!

Angela said…
I never knew that in other states you have to take a class to hunt. I don't think you have to do that in WV. And I'm thinking you don't need a license to hunt on your own property here either or at least that is what I've heard. We don't hunt but should. Too bad about your plant. I have 5 rabbits in our yard. I love looking out and seeing them. Jazz herds them around the yard but she's not interested in eating them so they are safe from that. Two on the other hand might would eat them but don't seem interested in them.
August 2, 2012 at 12:32 PM

Sorry I've been away for a couple weeks! I took a see beautiful vacation, but I'm back and catching up!

Mary said…
JP -- when we started planting around the farmyard, we had to put chicken wire around all of the trees and flowers to keep the rabbits out. You might try this.

Excited about your hubby being able to hunt. Sounds like venison for you in the future. xo
August 3, 2012 at 7:46 AM