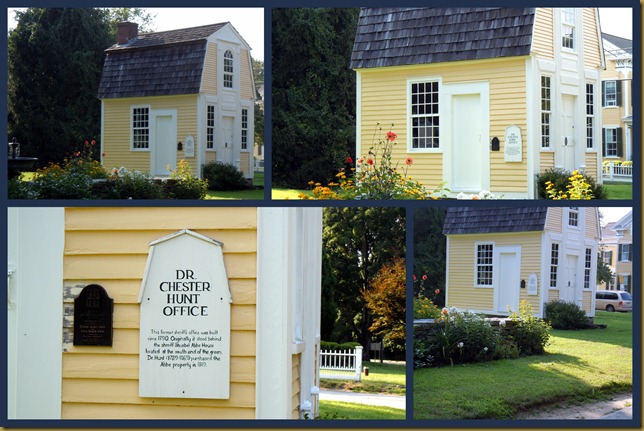 I remembered to bring my camera.
And stop.
(Quite often I bring the camera and forget to stop!!!)
I’ve admired this little building ever since we moved to the Center.  Isn’t it just darling?  Then, when I began taking pictures, I read it’s history!
It was the Sheriff’s Office at one time.
It then became the doctor's office!
Wishing he was in.
I would go to him becasue of the building!!!!
Sharing with:
Rural Thursday Blog Hop
&
Katherine's Corner's~Favorite Things
Email Post
Labels: Rural America

laurak/ForestWalkArt :) said…
that looks like a little house in some fairyland!

so tiny! i wonder if his office desk converts into a patient table.

Anonymous said…
It's amazing how little space people felt they needed as opposed to now.
August 21, 2012 at 8:06 AM

Bee Lady said…
It's adorable. Would be a cute potting shed! I love historic buildings.

Beatrice P. Boyd said…
It's great, JP. that you had your camera along and were able to capture this little piece of history to share. Makes me think that back then there weren't too many prisoners or patients!
August 22, 2012 at 1:03 PM

Joy Tilton said…
Too cool! I love that little building, I guess it's the Conn. equivalent of the MediQuick shops at Walmart!
August 23, 2012 at 8:24 AM

An Apel a Day said…
It is so cute! It looks like a giant doll house.

Bettey said…
Hi Fellow Photo Meme participant, Just a quick note to let you know that starting tomorrow, I will begin hosting a new photo meme on my blog. Please come join me at "Orange You Glad It's Friday", and post a photo displaying a little or a lot of orange, my favorite color! Hope to see you there!
August 23, 2012 at 9:21 PM

Thistle Cove Farm said…
What an adorable little place. Nancy C. is right...Doc from Gunsmoke is in the house! -LOL-
Visiting via Rural Thursday Blog Hop.
August 24, 2012 at 9:26 AM

Katherines Corner said…
a charming building with quite a history. Thank you for sharing at the Thursday hop xo
August 26, 2012 at 2:38 PM