It’s hard to believe but my last classes are next week!  Learning a lot in a few short weeks, I will, once again, sign up for the next class which will last a total of thirteen weeks.

Although I do not want to bore you with the details, being introduced to Tai Chi is teaching me how to “land”…how to relax…through breathing, through posture, through body movements.  Typically I arrive at the class in my usual excited state.  However, after a few brief moments, I am now able to “land” without crashing!  LOL!!

Perhaps practicing the eight moves and various exercises will prepare me for what lies ahead.  I’ve been told that our measurements* are forwarded to a national database.   By measurements I don’t mean bust/waist/hips/sleeve length.  Measurements in our classes refer to timings measured with a stop watch…things such as speed, flexibility and balance.

For instance, last week, we walked around the huge room imagining that someone was literally pulling us by the imaginary belt around our waist.  Keeping our back straight yet tilted as far back as we could lean, our legs were told to move forward and outward, keeping knees flexed the entire time.  I was pooped when we stopped yet although rigorous, it was extremely relaxing.  The nights I attend class and/or practice, I find myself sleeping more soundly! 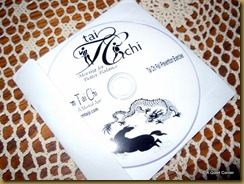 For now, I have learned (note I did NOT say mastered!!)  eight of twenty four forms all reported to increase balance, strength and over~all well being...Hold the Ball, Part the Wild Horses Mane, Single Whip, Wave Hands Like Clouds, Repulse the Monkey, Brush Knees and Push, Fair Maidens Work with Shuttles and Grasp the Peacock's Tail.  Although their names were initially strange, their symbolism has become quite clear now as I practice and I can actually visualize each.  In addition, we've been taught a series of "exercises" involving breathing, loosening our hip, knee and ankle joints as well as crane moves for upper body strength.  The day after we performed this one, I could barely raise my arms above my head!

I have yet to find the “right” music mix with which to practice but know that when I hear it, I’ll know put it to good use.
.
Time to unwind and go practice...:)
Email Post
Labels: Health-Wellness

MadSnapper said…
sounds great health wise and for relaxing. they do wheel chair tai chi at the nursing home.
August 24, 2012 at 8:57 AM

Tyrean Martinson said…
I took a year's worth of Tai Chi classes so many years ago and I loved reading this post . . .it brought me back to the exercises and made me wish to take it again. I remember how challenging the movements were, and how much strength they helped me gain.
August 24, 2012 at 10:54 AM

Beatrice P. Boyd said…
Have never tried tai chi, but did take several yoga sessions at the local Y and had problems keeping up with the more experienced folks.
August 24, 2012 at 3:06 PM