Did you figure out the solution to my dilemma?

Well, let me tell you, it was mentally taxing!  As you saw on the remote picutred in Part 1 of my adventure (and yes it was an adventure!!), there are three buttons.  Unfortuantely, the remote did not come with a set of instructions..

You see, the larger button makes the door go up and down.  The middle~sized button turns the garage light to go on and off independently of the door being raised/lowered.  And the smallest button (similar to the all too familiar story of The Three Bears) locks the door in it's postition, whether it be raised or lowered.  Although not initially impressed by all the garage door's features, I later realized the importance of each and every one.  Pretty cool, huh?

Now, back to the cat.  While I played with the darn remotes (one of which was totally dead), little Rocky watched out the kitchen window.  I don't think he fully understood why I kept coming in and out of the kitchen, rummaging through the drawers looking for a spare house~key, texting my son and his wife, calling/leaving messages for my son and his wife, all in an effort to lock up their house! 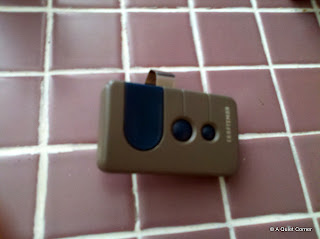 Once out in the driveway, I tried the remote several times to be sure the door would lower/stop/raise before I headed home.

Of course, it only took me the better part of the morning to figure all this out!  However, when I got home and told the Pres, he was really impressed with the feature...right from the beginning!


The following Tuesday I returned to the scene.  Things worked just fine!  In fact, I even had some time to do a little pruning in my son's yard.  Since he's new to the intricate wold of gardening, I knew he'd appreciate it.  My plan is to return next week and try to finish up.

And so I did...return but not finish!  It was too flippin' hot.  After two and one half hours in the blazing sun with high humidity, I could feel myself running out of steam.  His huge wheel~barrow was overflowing and the large carrier I'd brought with me was bursting at the seams so it was only a matter of time.

Just as my mind had convinced my body to quit, I felt a sharp pinch on my back...turned out to be a bee sting.  And then I felt my finger burst open from the sharp blade of the ten inch bladed pruners I'd set on the ground.  Dummy, I thought!  Yep.  Through the good leather gloves and all, I watched the finger of the glove fill with blood.  It was time to quit.

And so.
I stopped.
He and his wife will be happy.
The Kitty Sitter will be re~hired.

gld said…
When you get tired; you should stop! I always end up doing something wrong or hurt myself if I work beyond that feeling whether inside or out!
August 19, 2012 at 7:39 AM

valerietilsten59.blogspot.com said…
Oh gosh JP. I have laughed my head off at "The Kitty Sitter"- absolutely great.
I was waiting to read, that maybe Rocky had lunged himself onto your head or something!
1 half hour is a long drive.
Hilarious as to how to use the garage door commando.. i would'nt have had a clue.

I sympathize with you re your finger and the prunning clippers. (cant spell) secatueres !!!
I was going to write a post about a month ago , of how i nearly cut off the top of my left index finger. I have truly never seen as much blood.
Its still not so good. I was lucky not to lose the whole top of my finger tip.
Hope it gets better soon.
great post
happy Sunday
val
August 19, 2012 at 7:45 AM

Beatrice P. Boyd said…
Hi JP, just finished reading both parts of the kitty sitting adventure, which it really turned out to be just that. You have certainly gone above and beyond and hope that Rocky and his human parents appreciated all your efforts at pet sitting, mastering the garage remote, and pruning. Glad the injuries were minor too.
August 19, 2012 at 8:02 AM

Sonya @ Under the Desert Sky said…
Oh, boy! I'm glad you figured out the remote!

Inger said…
Working in heat and humidity always ends badly or so I remember from my New Jersey days. Staying indoors away from bees and sharp objects is a much safer choice. Please let the Pres know how grateful I am to the firefighters and how much I admire him and all of them.
August 19, 2012 at 3:56 PM

Ann said…
Well it would be nice if those buttons were labeled on the remote. Glad you got it figured out.

Angela said…
That's funny about the buttons on the remote! I never even try to see what the buttons do on mine. My new truck has it built in which is nice. I can't believe you drove that far to take care of your son's cat! I can't get anyone to drive a half hour to my house to feed my dog.
August 19, 2012 at 10:18 PM