Remembering the first time I went kayaking, I thought about her anticipation as I followed the directions on my GPS.  I'd left early, not knowing if I'd get lost or turned around.  Pulling onto the narrow road with the boat launch sign on the right, there she stood, waving her arms, smiling.  My best friend knows I can't find my way out of a paper bag and although I'd told her to wait in the truck, when I saw her it just told me that she still doesn't listen was as anxious as I was to hit the water!

She is certainly not new to the kayaking world as she has ventured out to numerous places with her brother over the years.  However, just this year she bought her own kayak. When we emailed each other, I could actually "hear" the excitement in her typed words..."I bought my own kayak.  I've wanted one for so long. It's Sunset", she wrote.

Well, what kind of a friend could pass that up?

Time for another adventure.

Destination chosen, time and date set, we got there nice and early.  It was cold.  The sun had not yet warmed the forest that surrounded us.  As the morning wore on, the clouds dissipated and the sun peeked in and out.

Paddling close to the shore, we saw some beautiful homes, some that looked like camps. 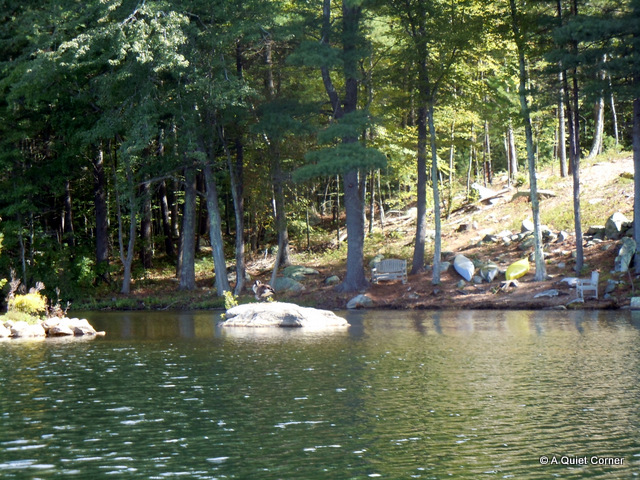 I wanted to sneak up on him.  "Wilma" (name changed to protect the innocent) paddled around the outer perimeter as I slowly made my way closer to the goose. 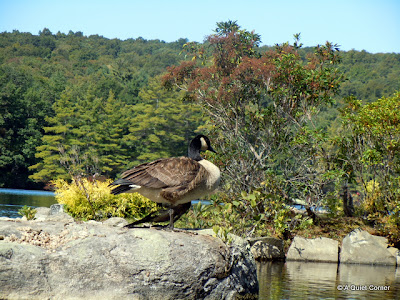 It continued to preen the entire time I stroked the water with my paddle.  However, then I realized that it's wing was broken, hanging at it's side so I'm assuming it swims out to the rocks to sun itself after foraging along the shoreline.

As we continued to make our way around the pond, I swear I saw a beaver's house.  When I return I'll get those shots for you.  Meanwhile, look what else we found. 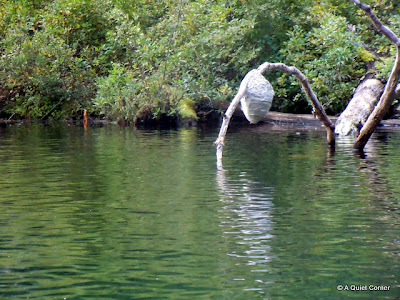 If you think it looks menacing from a distance, look at it close~up! 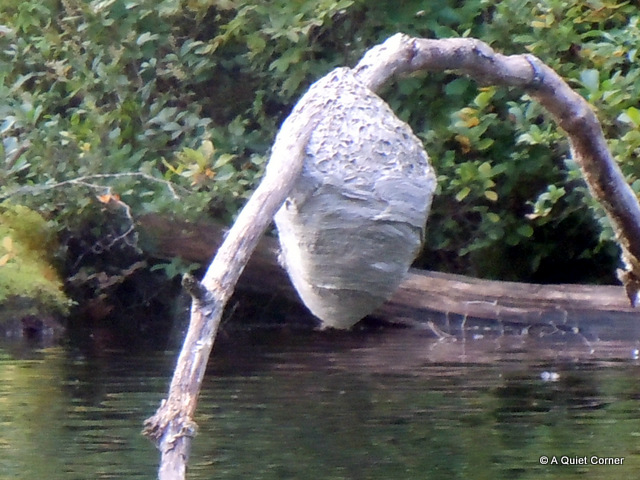 With a buzz of activity around it, we steered clear of this!

Deciding we would do this again, we even discussed appropriate clothing this time of the year.  It was downright nippy when we arrived in the morning and although I had shorts on, the cold bothered my hands more than anything.

When I got home, I ordered:
neoprene gloves
neoprene booties
waterproof jacket

gld said…
You are living a life full of adventure now. I like the idea of you having a friend along when you go kayaking. Can you flip the thing over? Just a worrisome though to one who can't swim.
September 29, 2012 at 5:46 AM

Tiggeriffic said…
What an adventure you are on in Conn. compared to where you used to live this is living.. Going Kayaking on a river with a friend..I have one more suggestion. buy a water proof container for your cell phone and tie it to yourself or the boat.. or maybe you have already done that..
Great pictures.. I have a hornets nest hanging in my garage.. I found it late fall near my mom and dad's grave..in Ohio. The nest was empty. I am so glad you are able to do something like this, quiet and relaxing and enjoyable to see Nature at it's best.. God is good..~! ta ta for now from Iowa:)
September 29, 2012 at 6:00 AM

Ann said…
Holy smokes, that's one huge nest. I would have steered clear also. sounds like other than cold hands you had a wonderful time
September 29, 2012 at 2:12 PM

Beatrice P. Boyd said…
Just spent awhile catching up on blog posts, JP, and you sure have been having great times with your kayak and nice to have a friend to go along too. That new gear should help with the chilly outings ahead. Enjoy the weekend, even if it means yard work cause it's a wonderful time to be outdoors.
September 29, 2012 at 8:01 PM