It was a beautiful sunny Sunday afternoon and the Pres and I decided to do a little more clean~up in the yard.  He'd gotten out his trusty pole saw to trim some of the low lying branches.  As usual, he trimmed.  I hauled the trimmings to the burn pile.

While he was finishing up a tree in the yard, I was up on the level above the stonewall and shouted out for him to come to the far corner so we could tackle some of the vines which entangled a dead tree.  I wanted to just get it to the burn pile once and for all. 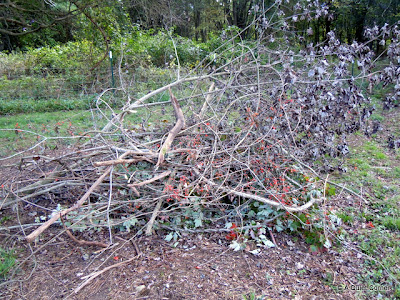 While the Pres was busy clipping and sawing, I grabbed the ends of the two inch vines and began pulling and tugging.  However, I was going nowhere fast.  The vines were tangled in the branches of a good tree and my hands just weren't strong enough to yank those things down!!  I'd get about fifteen feet away from the tree and that was it.

Suddenly my knight in shining armor appeared from nowhere!

Copper Lucas Aspen, the social reject...the dog who I taught HELP ME when he was a young lad of 10 months...came to my rescue.  There he stood looking up at me with his big brown eyes as if to say, "Mom, you need help and I'm your man."

Instinctively he grasped the vine near where my hands were.  Granted I said, "Cop...take it...tug it...help me"  but I never called him to help me!  The next thing I knew his Lab Pit jowls were locked onto the vine and he tugged, holding on, yanking, giving an occasional strong jerk, slowly walking backward with me until the vine broke free! 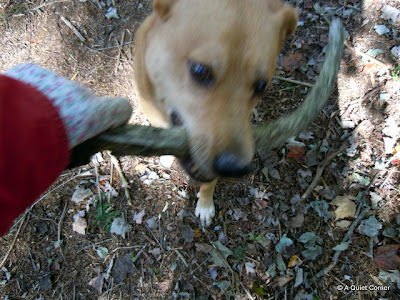 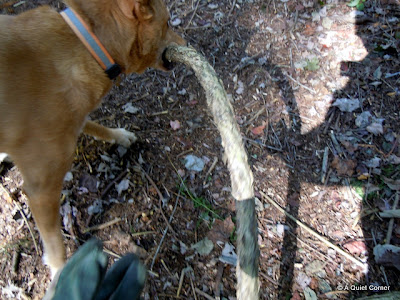 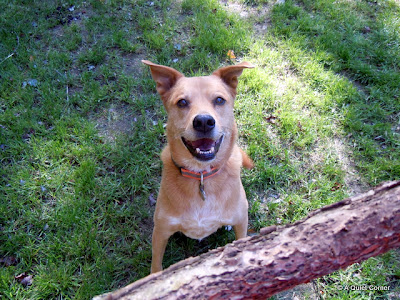 After we got the vines and the dead tree onto the burn pile, I had the Pres sever a section to give the boy as his reward.  Look how thrilled he was? 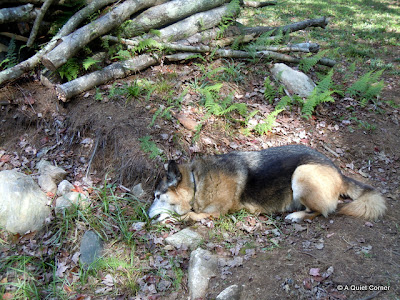 Oh, the Shepherd Husky...the working dog?
Note I said WORKING dog.
She was basking in the sun watching overseeing the whole thing.

Betty said…
That's no easy job. I've been working at getting some vines out of a couple of trees here and they were more like a half inch thick or less! I wish some of my animals would help earn their keep. My dog doesn't even come when she's called.
October 4, 2012 at 7:25 PM

Katherines Corner said…
sweet helpers. Thank you for sharing at the Thursday Favorite Things blog hop. Sorry It's taken me a while to get here and say thank you xo
October 8, 2012 at 8:44 AM