Leaving a little later on Sunday, he once again headed to meet his brother...a little bit farther of a drive.  This time, he was going to help erect a building...a little side job his brother picked up.

Needless to say on Saturday I had lots of time to myself to get stuff accomplished.  Deciding that I would add to the cookie stash in the freezer (after all, the holidays are coming!!!), I baked eight dozen white chocolate chip with macadamia nut cookies along with nearly six dozen oatmeal chocolate chip bars.  Then I got most of the laundry done too.  Although I only got one walk in with the dogs, it was a good one making me feel renewed and energized.

On Sunday, I decided it was time for some good old fashioned goulash and nearly filled the six quart dutch oven.  My goulash was delicious although next time I won't use as much seasoning.  After eating a big bowl,  I was just about ready to sit down to relax and grab the laptop when I saw a car pull up the driveway. 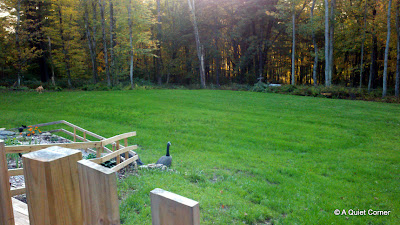 The woman in the passenger seat wore sunglasses and a hat which blocked my view of the man driving.  They pulled in...right up to the garage and shut off their car.  Who would be bold enough to just park in someone's driveway like that? I thought.  Moon and Copper were at the fence barking.  But it was the bark that said, "Come pet me...I know you!"  Exiting the front door and walking along the fence down the walk I rounded the corner of the garage.

As the woman opened the passenger door and began to step out, I recognized her!!
It was my daughter, Jennifer, and Angel.  They came from Newport for a visit!  It was such a wonderfully pleasant surprise!!!

What was as nice was what she said.
Mom, you have grass!

Now I had two someones to help me eat the goulash

the flaky bread braid filled with blueberries and cream cheese!!!

I made cake loafes and it was tiring and then I made some Cinnamon rolls as well in one day.I gave some to best friend she has broke her foot.My Hubby made homemade pea soup for them with pork Hogs..

I cannot imagine 6 Dozen cookies you baked. Your legs must kill.

You did made me laugh. Saying to self. Who would be that bold to sit in your driveway.

Ha,ha it was your daughter. Your a hoot!

Well I bet your daughter is even laughing harder.

Mom You never reconized me.

Ann said…
You do have beautiful green grass and how nice that you got a surprise visit
November 11, 2012 at 8:41 AM