First of all, not that it matters, but the tree crew couldn't come by on Saturday.  The project got bumped up a day because Dave (the fellow manning the fifty five foot bucket truck...remember that) wasn't feeling well.
What an incredible morning Sunday turned out to be though!!

Arriving at 8:30 am on the damp foggy morn, they almost immediately began their task at hand.  There were three men:  Marty, the owner of the business, who weighs about 180 lbs; Dave, who works for a tree company full-time, who weighs about 160 ; and Santos, a strapping young man weighing 280 lbs and works full-time for Marty. 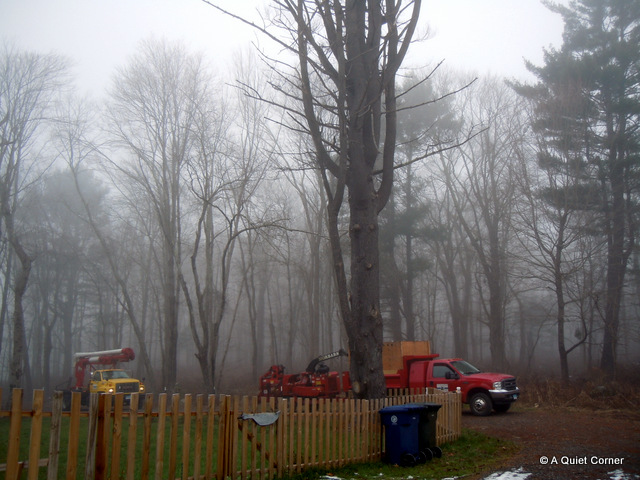 The boom of the bucket truck is fifty five feet long.  Here is Dave up only a mere twenty five feet, was able to snap off four inch diameter branches with his bare hands...that's how dry and brittle the tree had become! 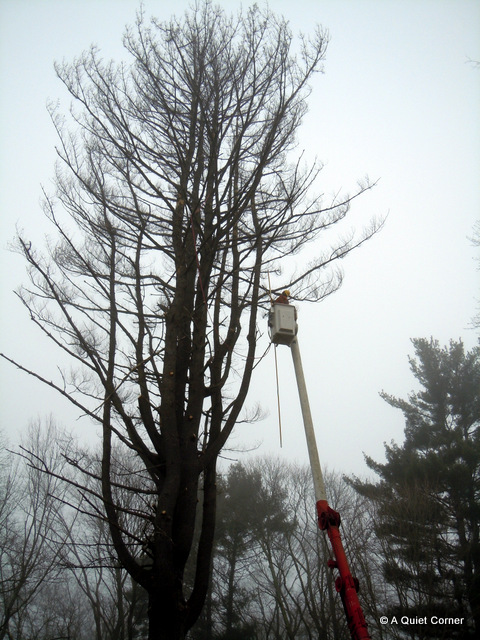 Working with the bucket full extended and using a huge hook on an extension pole, he secured the end of their cable to an outer branch. 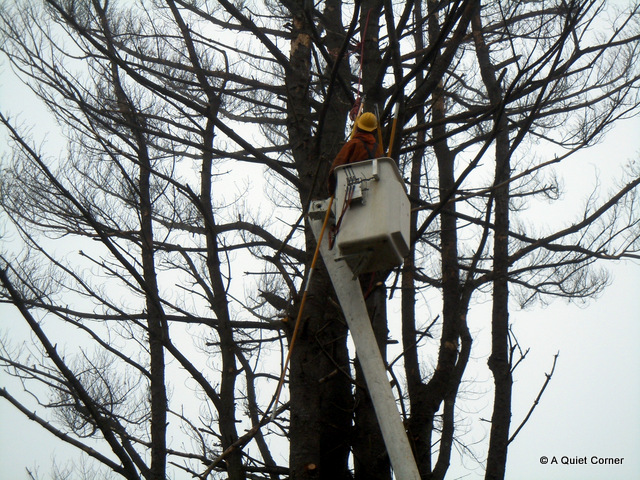 Dave ensuring the cable was tangle free so the boys on the ground could use their body weight and strength to exert pressure on the taught pulley when it was time.
Did you know that using a pulley system their weight can nearly double?  That means that between Marty and Santos weighing about 460 lbs, they would be creating 800 lbs of pressure on the line which is what pulls the tree over in the felling direction. 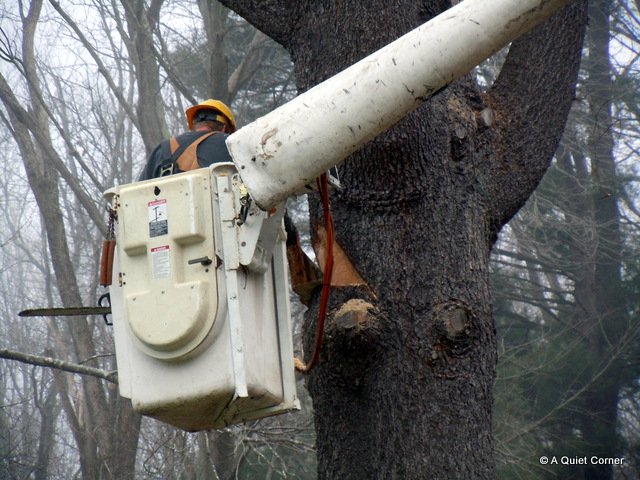 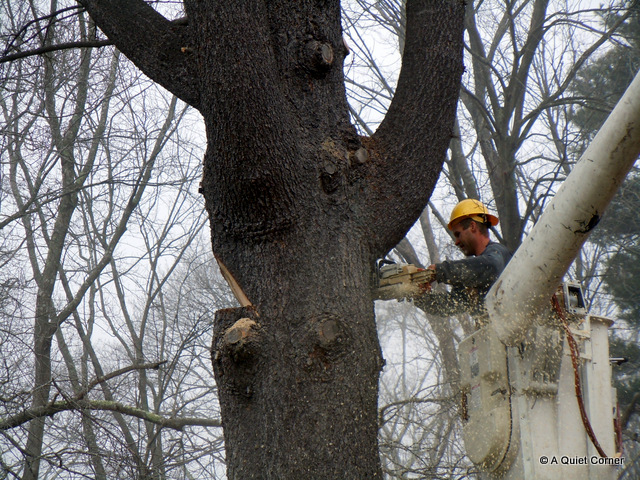 Then moving around to the back side, he makes a cut straight in and inserts a wedge immediately, banging it in with a huge hammer.  Almost immediately, the tree's upper portion of seventy five feet topples to ground with a thunderous crash.  It happened so fast that I couldn't get a picture of it falling and the response time on my camera is set to 2 seconds!! 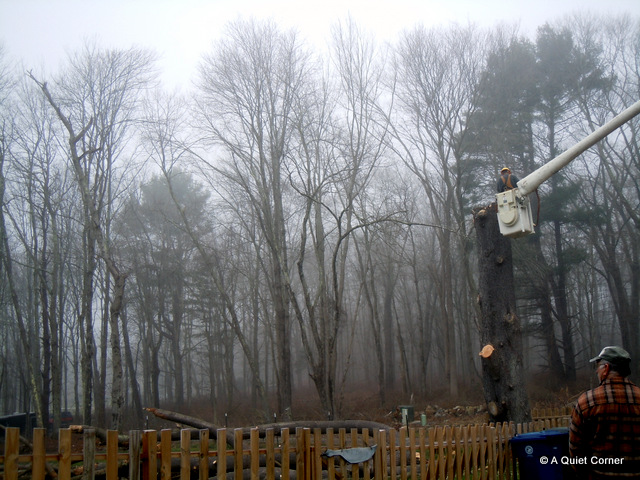 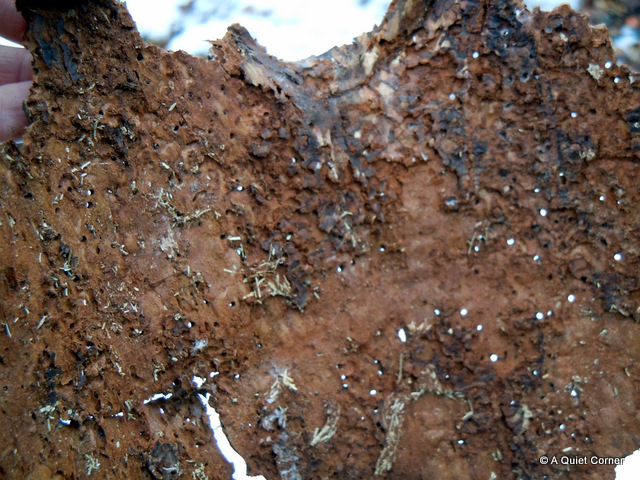 The Pres gathered up some of the bark so I could show you all the tiny pin holes made by some bug...another one of God's creatures. 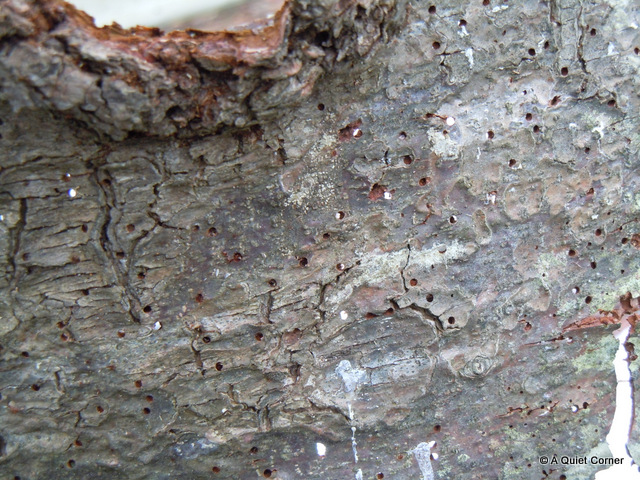 By ten fifteen, the majority of the branches sixteen inches or less in diameter had been fed into the wood chipper that they called "hungry mother" creating truckloads of chips.  I never saw three men work so hard in such a short time! 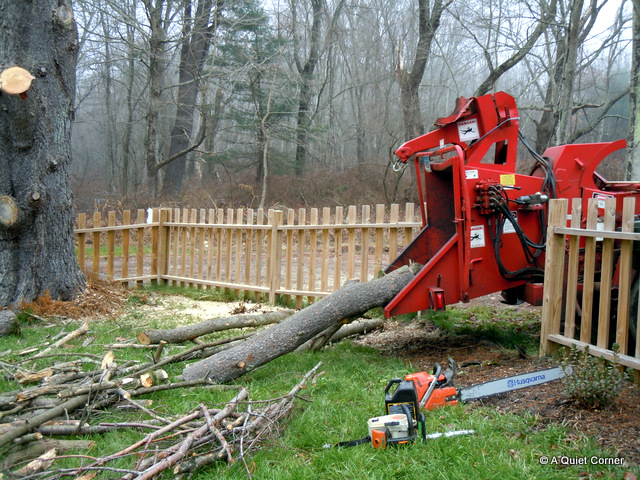 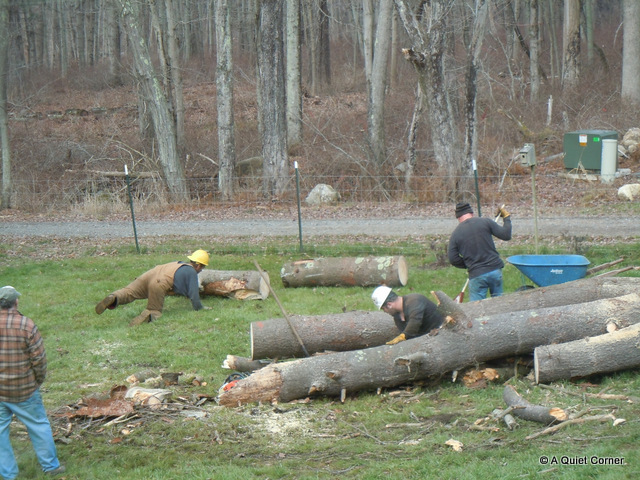 On Monday, Marty and Santos returned with their fork lift and truck to pick-up, load and haul the remaining white pine away. 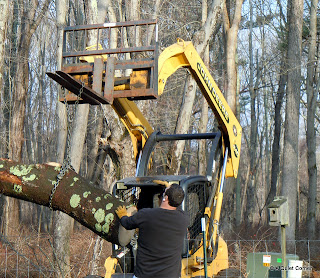 Santos made steadying the massive chunks of branch look easy steering them up and over our fence while Marty maneuvered the lift. 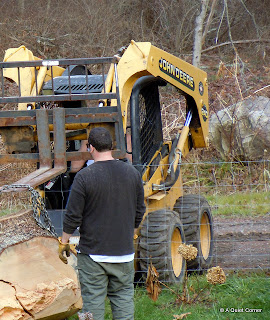 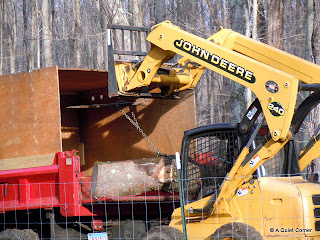 Strategically placing each section onto his truck, Marty waits for Santos to disconnect the chain before going back for more. 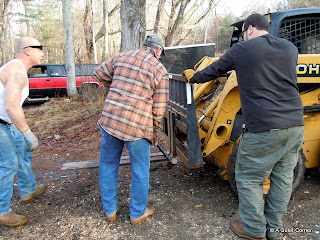 Hearing the Pres say, "let me get "the adjuster", I waited patiently for his return.  Come to find out, "the adjuster" is the Pres' old sledge hammer!!  It worked just fine, giving the boys a hand adjusting the forks.
However, it doesn't want me to know where "the adjuster" is kept...LOL!!!! 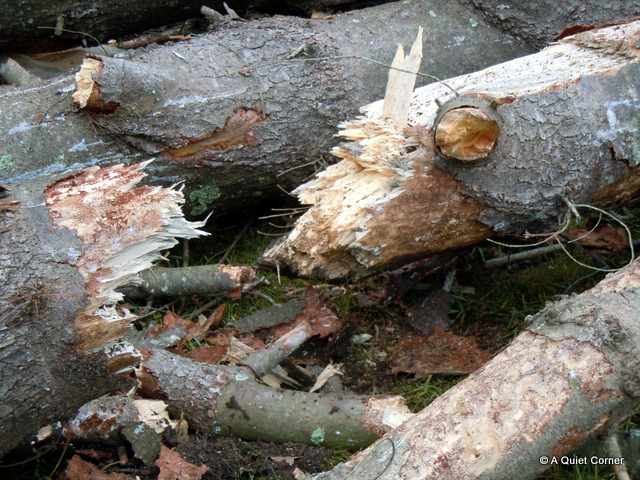 I thought I would be sad to see the tree fall.  However, seeing the process, how badly it was diseased and    watching so much of it literally shatter when it hit the ground, I knew it was the right thing to do...the only thing to do.  Picking up pieces of broken branches, I couldn't believe how light it was!  A chunk that I guessed would weigh five pounds judging by it's size, felt so light...  as light as a handful of paper!!

The majority of the majestic ninety five foot white pine that nature blessed this earth with for nearly 75 years was dry and brittle.

Anonymous said…
It's always sad to lose a tree but in this case you had no choice. At least you had a days entertainment out of it, not to mention a great post.
December 4, 2012 at 3:05 PM

valerietilsten59.blogspot.com said…
Mother nature was telling you it was time.
It is sad to see a tree come down. But this one was really sick.
amazing how quickly the crew worked.

Karen thisoldhouse2.com said…
I hate to see the big ones go down, but sometimes it has to happen.

Ann said…
It's a shame that it died but best to have it taken down the right way than have it land on your house some day
December 4, 2012 at 6:35 PM

Florida Farm Girl said…
Oh, I'm so glad you got it down before an accident occurred. It'll take some getting used to, seeing that empty space.
December 4, 2012 at 10:48 PM

Inger said…
It's something, isn't it? Tiny bugs can take down a huge tree like that. I agree, those guys worked hard and knew what they were doing and you did the right thing.
December 5, 2012 at 6:53 PM

Bee Lady said…
When we first started building our house, there was a huge tree that I insisted not get cut down. I felt like we cut too many down already. It was silly of me because AFTER building the house, we HAD to cut it down anyway, and it was huge and hollow inside. You did a good thing.