A Man About Town

Walking down Thames Street in Newport, my daughter and I noticed HIM immediately.

HE stood out.
HE was handsome.

HE seemed to be saying, "Come on over girls and say Hi!"

HE was only ten months old.

HE was something we just couldn't resist! 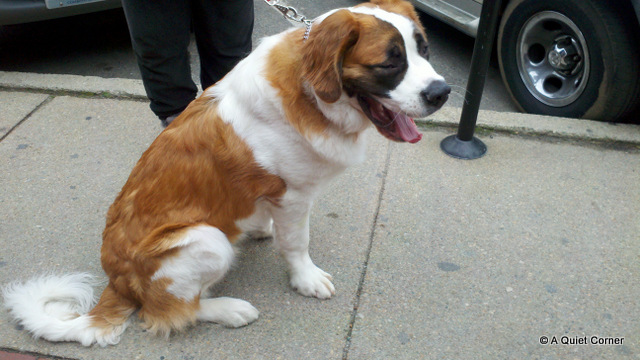 Asking the owner if I could take HIS picture and pet HIM before I moved closer, she smiled and answered immediately.  HE wagged.  Stooping down to stroke his large head, I gazed into his big, brown eyes.  Placing his left paw on my shoulder, he sniffed my face as if he knew me!  Then before I knew it, the other paw was on my other shoulder and we were eye to eye.  Telling him how handsome he was and that he was as soft as cotton balls, HE thoroughly enjoyed the attention.

A "PIT," said the woman..."puppy in training.  We're going to use him as a therapy dog because of his lovable disposition."

(It is here that I need you to imagine a
drum roll please...)