Can You Stay for Dinner?

Said the Pres, as our builder took off his supple brown leather jacket.  Answering his phone as he smiled and nodded, he took the drink the Pres handed him.  While he finished up with a client on the phone, he followed me into the living room and took his usual place on the couch.

Once finished on the phone, the discussions began...what's new, the water heater, the plow, the dogs...he knows us as if he was our son.  Then it was politics, conservation efforts, the pipe-line and we ended with good old fashioned food!  A batch of the Pres home~made sauce, meatballs and sausage with several hefty servings of ziti were enjoyed by all of us. 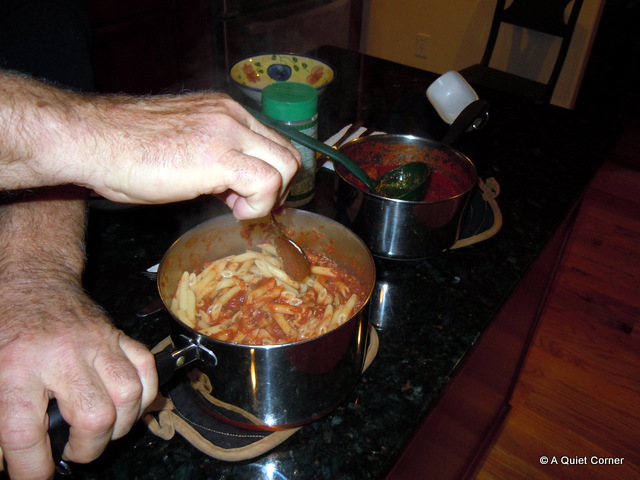 "Try this bread, Corey.  It's delicious and you can't get it around here.  We pick up about ten loaves at a time when we're in Cheshire and put it in the freezer."  It met with his approval as he went back for seconds!

After a few drinks when it was time to head out, several hours had passed and he was given a bunch of goodies to take home...cookies, brownies and bars.  He promised me he'd give me some of the orange marmalade he was making over the weekend.  I love orange marmalade!

Sharing our friends with you and

TexWisGirl said…
i love that you have such a good relationship/friendship with him.
January 31, 2013 at 10:48 AM

Beatrice P. Boyd said…
We invited our neighbor ver this week for homemade tomato soup and grilled cheese sandwiches...impromptu dinner guests who are also friends is a great thing, JP. And, we know how you and Joe like to send visitors home with goodies too!
February 1, 2013 at 8:16 AM