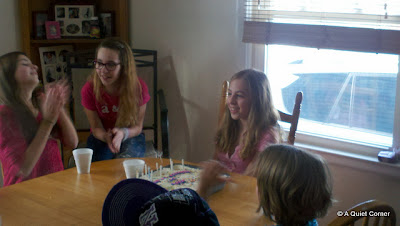 The birthday party we went to last week was different   Oh, don't get me wrong, we gathered around the dining room table as usual.  You see, Rhia turned twelve.  She's at the age where her friends matter (although she's occasionally look up at me and smile).  And so it was...the family and other adult friends stood around the edges of the room being careful not to intrude on the fun they were having.  It's called respect... and she's been taught that it works both ways. 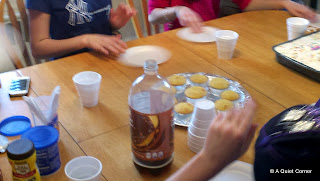 When it was time for cake, her Mom and Dad placed both a home~made ice cream cake (above) as well as two dozen cupcakes on the table along with frosting and decorations, telling the kids to "do their thing."

And leave it to kids to do the unexpected.  Rhia's best friend decorated a cupcake and then "smuched" it into Rhia's face.  Then the fun began! 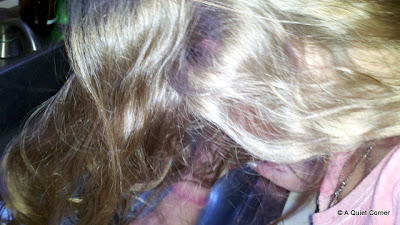 It didn't take long for it to spread faster than the frosting did!  No, it wasn't a "food fight" but before too long they all took turns washing their hair and faces with frosting!

Then it was time to clean themselves up and all three sinks in the house were busy washing hair, faces and hands!! 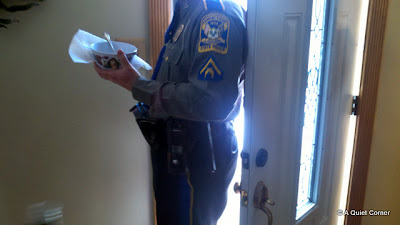 No, the cops were NOT called.   This is Rhia's god~father (who shall remain faceless to protect the innocent and me!!) who dropped in for ice cream cake.

What I found cute was when Rhia's Dad introduced him (the State Trooper) to her boy~friend.  He said, " Matt, this is Rhia's other father her God~father and I just want you to know that BOTH of us will come after you if you break my daughter's heart!" 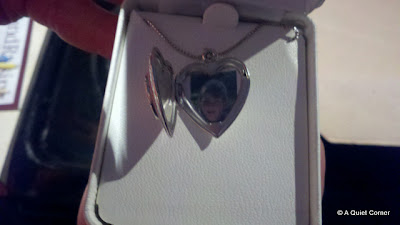 It was then that Matt pulled the small gray jewelry box from his pocket.  Opening it, and showing them the gift he'd bought for Rhia before he gave it to her.

Sharing the family with
Katherine's Corner

valerietilsten59.blogspot.com said…
Sounds like they all had fun.
Rhia is lucky to be allowed a boy friend... so sweet.
A very nice locket.
Our grandchildren grow up so quickly JP:
January 24, 2013 at 3:05 PM

Inger said…
Did she show off her godfather, the State Trooper, to her friends? That sounds like such a great and fun party.
January 24, 2013 at 5:21 PM

Unknown said…
Sounds like great fun! By the way, the only contact I can remember having with a Connecticut State Trooper was when he pulled me over just west of Hartford (I think) for being in the far left lane when trucks were not allowed over there unless they were needed to take the left-side exit onto another road. I told him that I was running behind and trying to get around the slower traffic. His reply was that I was obviously not from around there, and then he sent me on my way after advising me to not do it again. Oh, how I wish there were more like him out there.
January 25, 2013 at 11:06 AM

Katherines Corner said…
wow, that is a lovely birthday! Thank you for sharing at the Thursday Favorite Things hop xo
January 26, 2013 at 10:11 AM