Outside with the dogs, as I rounded the corner of the garage, I followed the trail of feathers.  Wondering which one was the culprit and which one was the victim, I noticed that something had happened in the pre-dawn hours. 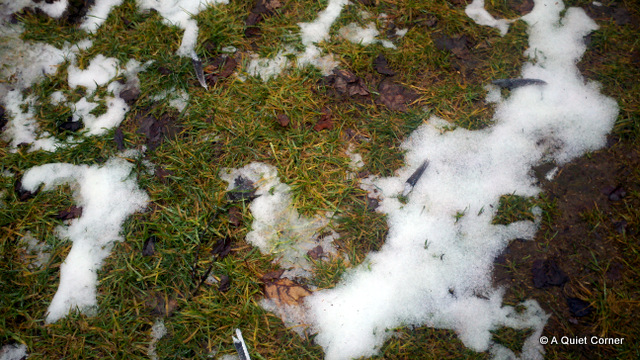 The larger feathers are, as you can see, gray and white. 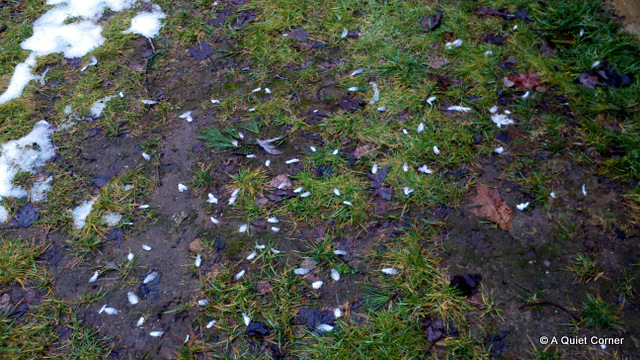 A lot of smaller feathers scattered around the scene of the crime made me wonder what did what to what. 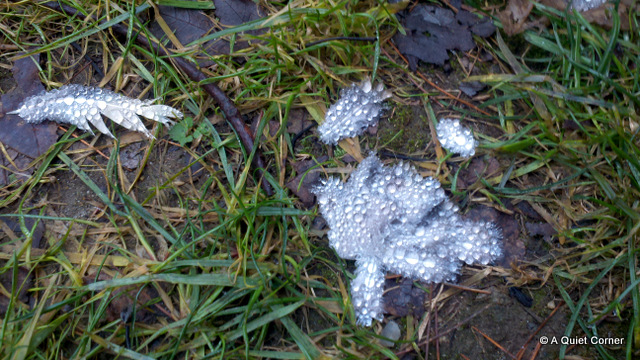 Covered with the morning dew, the feathers lay alone and then some in clusters.

My guess?  An owl (as I watch them come in early in the morning and then again late in the afternoon at dusk.)

We have a ton of owls here.  But, we also have hawks...Red-tailed, Sharp-shinned and Cooper's to name a few.  Then again, just last week, I saw my first American Bald Eagle of the season heading to the dam up the road from us.  It probably was here last year enjoying the salmon they stock right below the dam.

gld said…
As long as it isn't chicken feathers, I try to take it in stride.

We rarely see the owls here; we hear them but that is all. I haven't seen an eagle for several years. We aren't near a large body of water. You are fortunate to have all that surrounding you.

MorningAJ said…
It's amazing how these things tell their tales.
Are any of your hawks grey? Otherwise I'd guess at owls too.
January 17, 2013 at 7:40 AM

Bee Lady said…
Oh my gosh...that was some big bird! It is the circle of life though, like you said.

Florida Farm Girl said…
Yep, all G0d's chilluns got to eat, but its not always pleasant to watch or to see the aftermath. I hear great horned owls here occasionally, but I've never seen one of them nearby. Now the hawks, that's another matter.
January 17, 2013 at 12:27 PM

Betty said…
I'd love to see an eagle in the wild. When we lived in Oklahoma 20+ years ago there was an eagle sanctuary where they would hatch the eggs, feed the babies, and then release them into the wild. They would remove the eggs from nests in Florida and bring them to Oklahoma to hatch and raise. The eagles there would lay another batch of eggs. It was very interesting to see the baby eagles. They would grow so fast. That was all done back when they were endangered. I don't know if they are any more. I know what you say is true, but I wouldn't want to see it.
January 17, 2013 at 2:02 PM

laurak/ForestWalkArt :) said…
yeah, it's sad when u see a bunch of feathers...you know something happened...something became something else's meal. oh well. it's the way of things.
i would've collected the feathers of course!! =)
January 19, 2013 at 9:38 AM