One upon a time, there was an older woman who wanted to take down and put away all the Christmas decorations because Christmas had long passed.  Beginning the task early (because she's an early riser) while her hubby was still asleep, she carried each tote from the garage into the house, tiptoeing so as not to wake her hubby (because that's how she is).  She strategically placed the totes in the order that she needed them to make less work for herself (because that's how she is).

Carefully dismantling the displays, she placed  all the Santa's, the ceramic vase, the manger, the greenery and all the wall hangings into the totes in an orderly manner (because that's how she is).  Smiling she stood and looked at what she'd accomplished.  All that was left was to un-decorate the tree.  Systematically she gathered up all the ornaments and placed them in their respective containers, leaving just the tree for hubby.  This woman is very organized and wanted to have it all done before he woke up (because that's how she is).

Things were going quite nicely until...turning around with a big tote in her arms she tripped...not on Christmas stuff...not on the rug...nor on another tote.  She tripped on a dog named....Copper Lucas Aspen "B", who lay sprawled out on the floor!   The tote in her arms went flying (oops...not so quiet anymore!!) and hit the railing on the stairs, ricocheted off  the banister (oops...definitely not so quiet anymore!), causing the top to open  subsequently launching a few items, most of which were wooden (oops...have you ever heard the sound of many wooden objects hitting hardwood floors?)!  Out of her mouth came a bad word..."sh.." (because that's how she is!!)!

The downside was that the Pres woke up and the bruise she got on her arm from hitting the railing!  Of course, it could have been worse...she could have gone over it completely!!

Don't worry they're fine...she was able to rebound and not hit the ground...thank goodness...but Copper decided he'd be safer downstairs in his bed rather than sprawled out on the carpet!   Now don't feel bad for Copper....after all, he did get a new bed for Christmas!!   And you don't have to feel bad for the Pres...it was nearly nine o'clock! 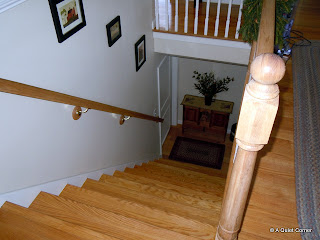 Meryl Baer said…
Ouch! Hope you heal soon and none of the ornaments were permanently damaged.
January 11, 2013 at 9:31 AM

Angela CG said…
At least most of the decorations were put up and ready to go before the Pres was awakened. You have my sympathy for your bruises.
January 11, 2013 at 9:34 AM

Ginny Hartzler said…
I am just very, very glad you did not get hurt worse!!! And when I see these steps I shudder. I have to watch all the time that I don't trip on our cats, they love to come from behind and dash right in front of you.I am also glad that nothing much broke. Your husband is a lucky man!
January 11, 2013 at 1:45 PM

Beatrice P. Boyd said…
JP, You have my sympathy and we will be doing the same thing this weekend, but hopefully will both be awake.
January 11, 2013 at 10:47 PM

Sally in WA said…
Whoa! Glad nothing more serious happened like going over the railing and down the stairs. I'll take a bruise any day over that!
January 13, 2013 at 7:25 PM